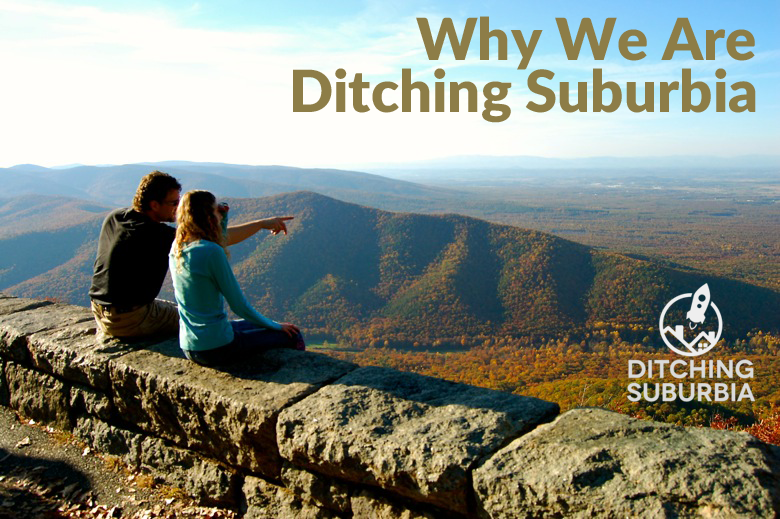 Or - what brought an average family of four living in a average ranch house in a average mid-western town to sell the house, give away most of our stuff, buy a truck and trailer and plan to travel indefinitely?

When we purchased our home in 1996 the housing market was booming.

The expectation was that we could buy this house, do relatively little to it other than live in it for 5-7 years, and then be able to sell it for a nice profit - and get something bigger and nicer.  This formula was proven over and over in the previous decades.

Home ownership as a means to financial security and freedom is deeply ingrained into our American psyches - if you are married and have kids and aren’t living in a stand-alone home that you are making payments on you are obviously doing something wrong or just haven’t arrived yet.

Well - so much for that.

Here we are years later and the housing market has tanked. The house is worth little more than what we paid for it no matter the new roof, new cement work, new furnace & AC, or countless other improvements we’ve made.

We are disheartened.  Frustrated.  Mad even.

Rather than a ticket to greater personal worth the house became a needy anchor - demanding our attention, time and money while keeping us stuck in one geographic location.

However - being disheartened led us to question the value of the time and money we were putting into the house.  When we realized that we would see little financial return on some of the remaining changes we wanted to make, it was easier to decide to just not do them at all.

And them something funny happened.

Our emotional investment in the house drained away - where it used to be something we always stressed over not being “good enough” or “done” - it’s became just a collection of sticks and bricks. We kept it during our first year of travel but came back knowing it was time to sell it off and be done with the responsibilities it presented.

In 2002 I was employed as a project manager at a Fortune 500 company.  Here in W. MI it’s considered one of the “best places to work”.  Historically if you were lucky enough to get a job at this company people pretty much figured you were set.  It’s done well over the years, makes globally recognized products, has a long history, and has a reputation for having a great retirement package.

Then - somewhere, some men decided to crash a plane into a building.

And the thunder from that single act has continued to reverberate in my life.  The market shrank.  The company started layoffs.  I was one.

My cushy “secure”  job was gone and I was ushered to the door with a cardboard box filled with my personal belongings.

Yes - it sucked at the time.

But ever since that day that job loss has become more and more important in our family’s life.  A few months after getting the boot I started Boyink Interactive, which lead to finding ExpressionEngine - and we got used to making a living through work that only required an internet connection.  Then I started Train-ee - which got us traveling again.

We realized that we could successfully negotiate new environments as a family, have fun, and learn a ton while doing it.

So we’re no longer emotionally invested in a house.  We can earn an income with just an internet connection. We can travel as a family.

We’re homeschoolers.  Always have been.

At some point it occurred to us that our house was the only thing really keeping us in West Michigan.  MsBoyink and I started joking around - about ditching the house, buying an RV and just hitting the road full time.  We joked around so much—and didn’t want to let the kids in on it (if you have young children you’ll understand that) so we named the idea - “The Pipe Dream”.

We’d talk about it, noodle around on the web, and store bookmarks etc - but all as just a way of having conversations.

I mean - that’s what so many people say:

Oh - see the states. I’d love to do that.  Maybe someday. When I’m retired.

It’s a crazy system we’ve created for ourselves:

We do all this for years - in hopes that when we finally get to retirement age there is just enough money and just enough health and just enough life left in us to finally kick off the shackles and take complete ownership of our days.

But it doesn’t take long to start hearing stories of where this didn’t work out for people.  We’ve heard about men who work for 30 years. Want to travel.  Finally retire.  And drop dead the next week.

We have no solid retirement plans. Or finances. That was a casualty of deciding to start a business.

I’ve been on my own for so long I just can’t stomach the idea of giving it up to take a “real job” just for a better retirement plan.  We’ve seen others who did a better job planning and saving suffer significant losses over the last few years.  So - that didn’t work.

Ultimately it’s all a gamble - and so we’re choosing to take action now.

While we are healthy, have good eyesight, and have kids who still like us and want to hang with us.

So - leave a light for us, but we’re hitting the road.