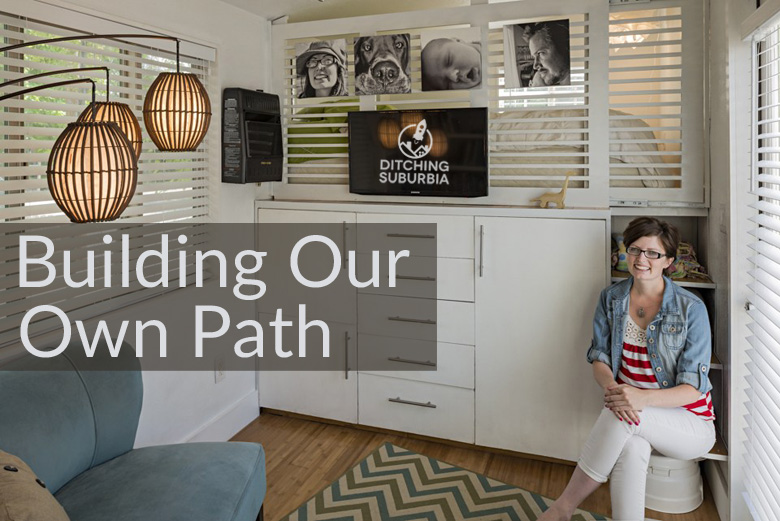 23 years on this earth and I found myself having achieved everything parents ever hope for their kids. And. I. Was. Miserable!

I graduated college with a masters degree. Married a nice enough guy. Had a big fancy house. A job that I always thought was a far off dream.

The big secret is that all of that usually comes with other stuff too.  Debt to your eyeballs. Miserable commutes. Small pockets of time to socialize, if others are available too.

None Of It Felt ‘Right’

Then the levee broke.

In a matter of weeks I lost my job, filed for divorce, put my house on the market, and ruined my credit.

Everything changed in what felt like a moment. It felt awful. I’ve since realized I am SO lucky to have gotten out of that cycle!

For the next 4 years I walked around feeling like a foreigner. I felt distant, like I just couldn’t relate to anyone anymore.  Then one day, I said screw it.  No more pressure to fit this ‘mold’.

I had a dream to build a small house. After everything, I had no ambition to find more debt. I wanted to DO something, with my hands, I NEEDED to build something.

I wanted to build a boat, but I am terrified of water. The first thought was that I could build a customized ‘land boat’ and travel where I want.

After a quick Google search, I was introduced to the tiny house community.

A Week Later I Bought a Trailer

It took 18 months to build my home, with my own hands, paid for as I went. It was the best therapy I could have had.

In the process I rebuilt myself.

Ironically, I found my own foundation in building a home that lacked just that!

In the process I was cleansing old relationships and making new ones.  Figures in my life showed themselves as strangers. Strangers reached out and provided strength over this, slowly tangible idea of living minimally.  The idea of living differently suited me well! 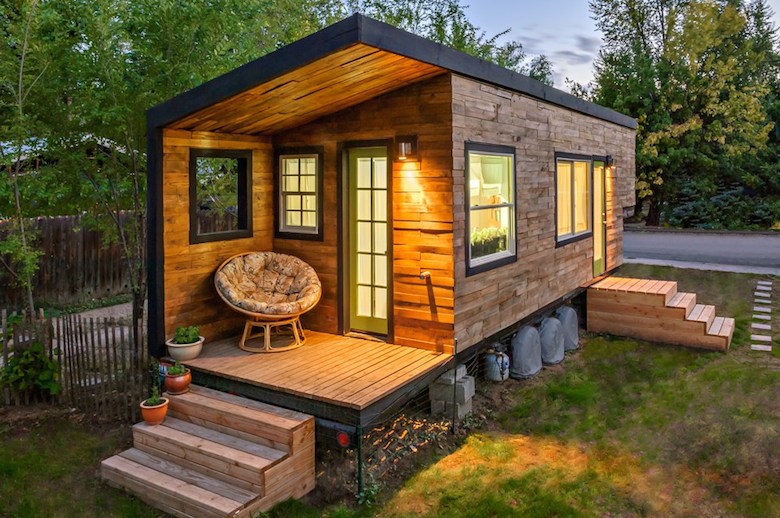 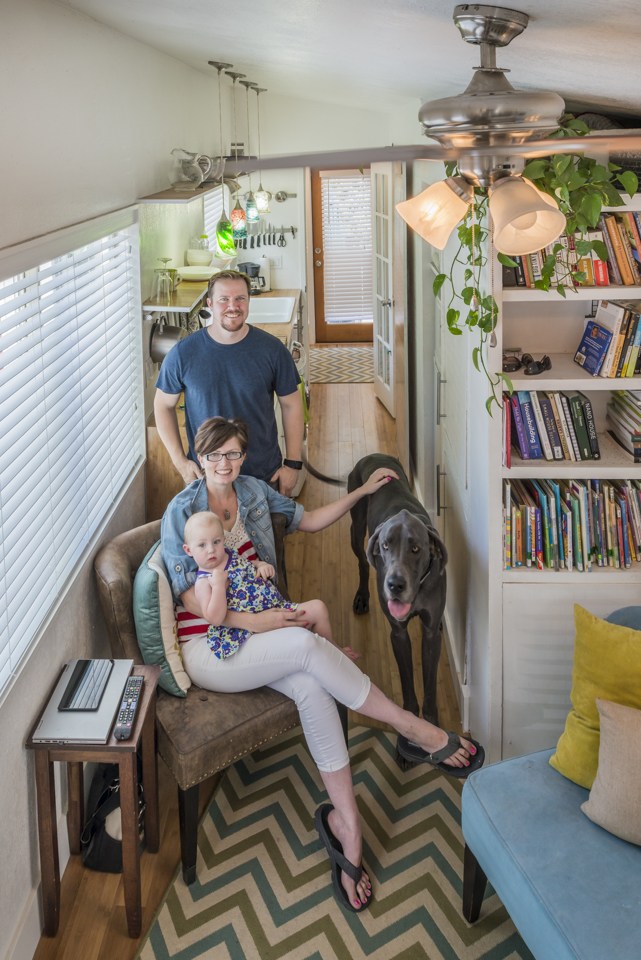 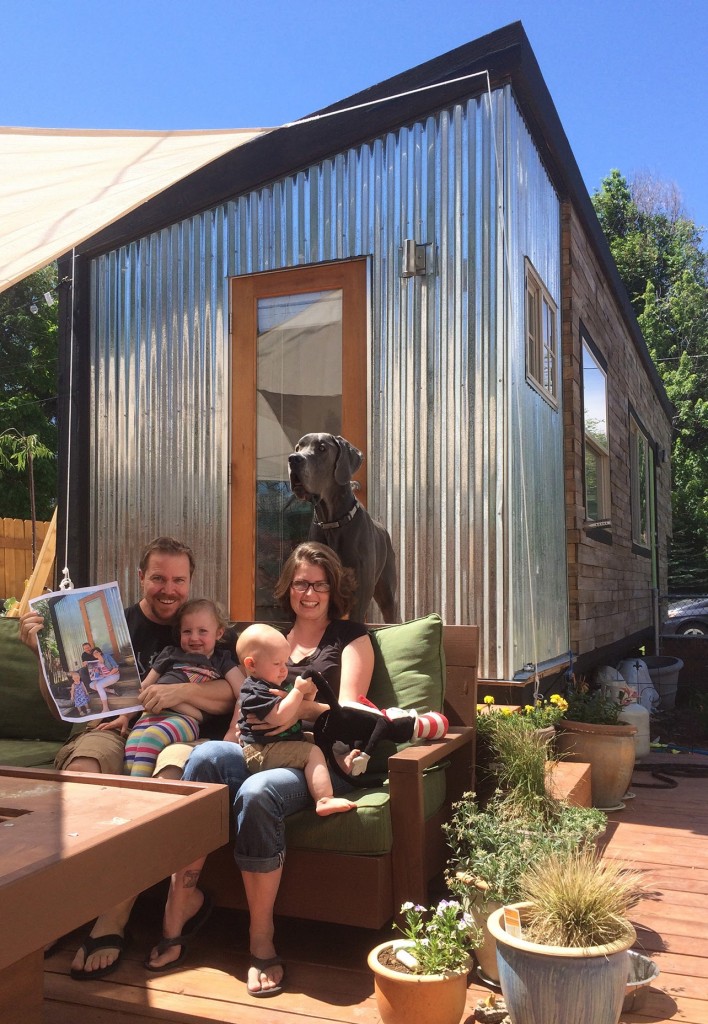 Now a family of four. 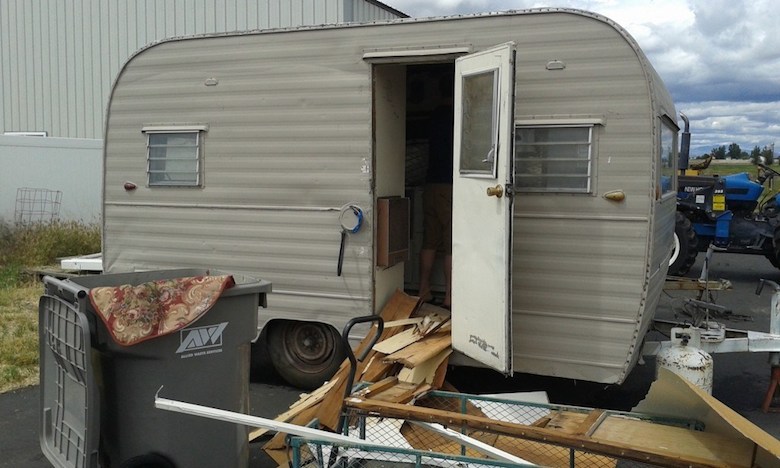 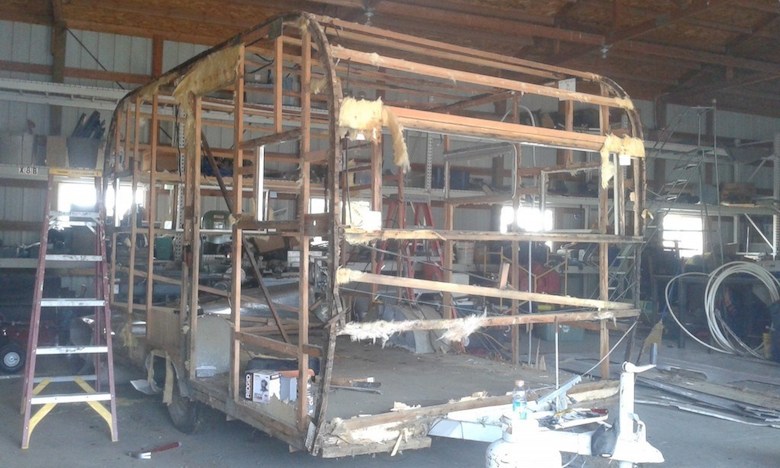 All the way to the skeleton. It went past this to the frame. 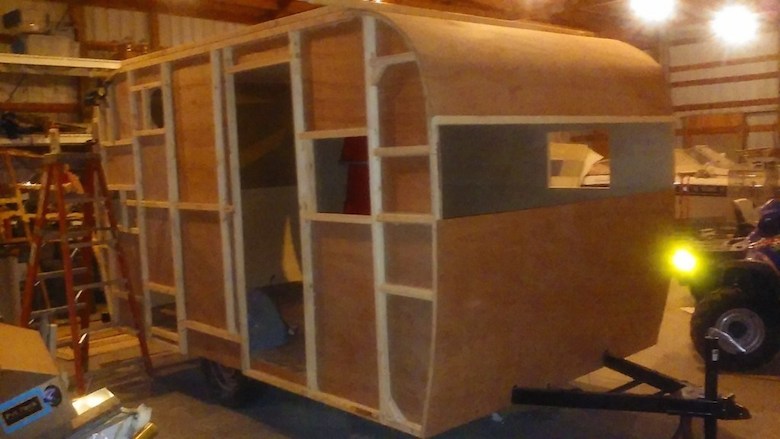 Rebuilt shell. Insulation and exterior skinning are the last step. 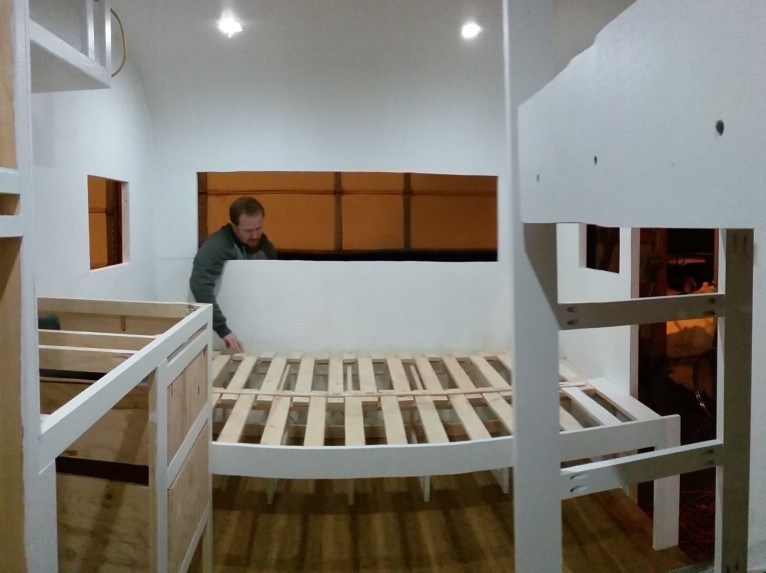 In the Process of Building I Met a Man

He didn’t run.  He actually SHARED my views.

Long story short, he moved in. We got a dog. We had a kid. Then we had another kid.

All of those things that drove us down this alternative path have only became MORE important once we had little people to raise.

Living minimally seems simple. Idealistic even. Something that everyone likes to dream about but usually only in the far off future.

Rarely do you find someone who will entertain the idea as ‘realistic’.  Those are ‘my people’ though, and they are out there if you look for them!

By minimizing our homes and living tiny we have been able to scale back our day jobs enough to focus on our kids and start building our own companies. Passion driven projects that allow us enough to be stimulated mentally while also providing income to explore opportunities for our family.

As of this month we’ve officially quit our day jobs.

We’re now debt free. Past the [so hard] baby stage.  We have two very inquisitive kids who we want to share the world with, literally!

We Have an Aching to Roam

Frankly, we have very little idea what we are doing when it comes to full time RVing but we have learned that the good parts in life happen when you get outside of your comfort zone!

Six years after starting the tiny house build we picked up a [much smaller and lighter] 1966 vintage Aloha travel trailer to renovate and call our next home. It’s turned into a full on rebuild which is a great opportunity to make it exactly right for us!

We have very few preconceived notions.

We’re trying to keep plans open so we can adapt to what feels ‘right’ at the time.

Our overall plan is just to visit as many states as we can, as many national parks as we can and have some fun in the process!

To be honest, we’re terrified of this new adventure.

It will be a challenge.  We’re up for it though!

We know that this discomfort is where the fun really begins!

Macy Miller is a mother, teacher, blogger and architectural designer. She designed and built her family's tiny house in 2011 which has been featured in TIME and Dwell Magazines. She and her family have rebuilt a vintage RV and are setting off on a new journey, around the country in April 2017. She remains a strong advocate of alternative living and small space dwelling. You can find her at her website MiniMotives.com or in her Facebook groups, Family VagaBonding and Tiny House People.

7 Comments → Building Our Own Path