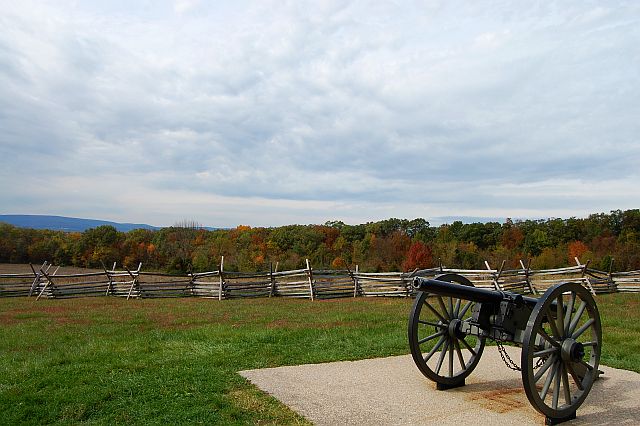 Canon against the Gettysburg fence and skyline

We arrived in Gettysburg the evening of October 17th, not really knowing how long we’d stay in town.  Once again the park promised free wi-fi that wasn’t working when we arrived.  We originally booked three nights to give us time to explore the historic parts of the area even if we couldn’t also plug in and get some work done.

On Monday we started at the visitor center where a very helpful ranger gave us an overview of the various ways to learn more about the area.  We passed on all the immediate “for a fee” activities (the museum, film, etc) as at this point we’re still trying to travel on a budget.  Checking the tips on 4Square and Gowalla one of the recommendations was to purchase an audio CD in the bookstore that would narrate you as you drove around the 19 miles of roads in the park.  We did that (and also added to our refrigerator magnet collection).  We did roughly the confederate half of the driving tour this afternoon - with the favorite stop being Little Round Top where the view was beautiful and the big rocks beckoned to the rock hoppers in our group.

On Tuesday I was feeling the need to get caught up on some work so I roused the family out of bed at a reasonable hour so we could use the Gettysburg Public Library’s wi-fi.  The library was only 2 miles fro our campsite.  MsBoyink and the kids came along to get some schooling done.  At lunchtime we headed back to the trailer and found that the park wi-fi was back up, so the family stuck around and I went back downtown, appreciating the change of scenery and being able to focus better on work being apart from the family. Since the wi-fi was up we extended our stay by two nights (up until Friday night when our Passport rate expires so we’d pay double if we wanted to stay).

On Wednesday we completed the second half of the driving tour, learning how the Union ended up prevailing after the very bloody Pickett’s charge, the “High-water Mark” of the war, and the “Copse of Trees” all at the end of the tour.  We also got caught up on grocery shopping and got the truck washed & gassed up (so much easier to do when not hooked up to the trailer).

Today (Thursday) was a work and errand day, I hung out in the trailer doing client work and a conference call.  The family found a barbershop to tame Data’s mophead, and MsBoyink traded in her MI-based cell phone for a new one on a national plan ( we were incurring roaming charges for the back and forth calling that we’ve been doing more of since travelling).  We also explored the Gettysburg National Cemetery - the place where Lincoln delivered his famous speech.

That’s a very factual-based account of our time here, which again doesn’t tell the whole story.  When you hear the accounts of what the Civil War soldiers had to endure, the number of limbs that were amputated, the rivers running red with the blood of men from both sides, it’s impossible to come away not moved at the sacrifice.  It’s also impossible to come away not feeling, again, like our generation has already forgotten this sacrifice and, in the process, become people of a caliber that would make these old soldiers slump their shoulders in disappointment and groan with embarrassment.  The things we see as trials, or issues, or as intolerable in our current lives are simply nothing compared to what these men went through.

We’re here for tonight yet, and in the morning will pull out headed for Greensville, VA.  It’s closer to Richmond, VA where we’re due for an ExpressionEngine class the first week of November.  I’m actually wanting to not sightsee for a bit as I have some trailer repairs and modifications to make as well as continue on some client work. 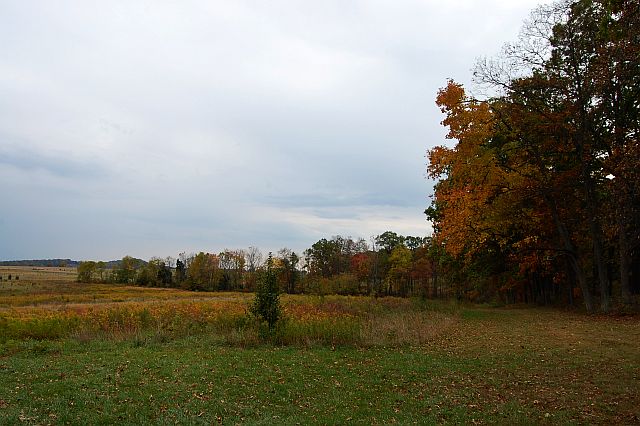 Confederate side of the battlefield 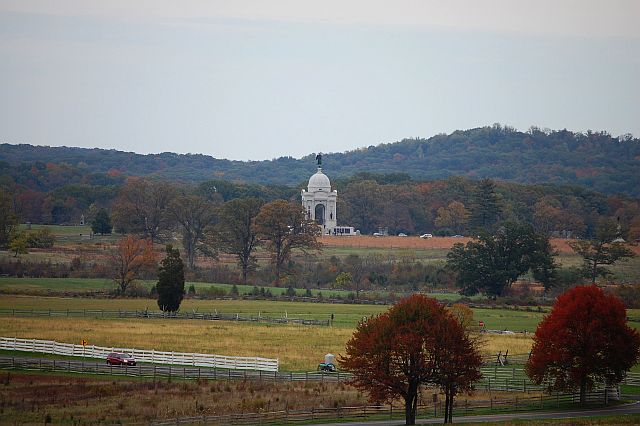 Pennsylvania Monument in the Distance 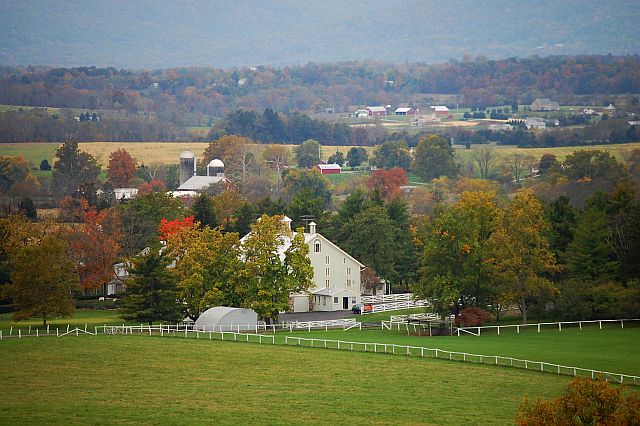 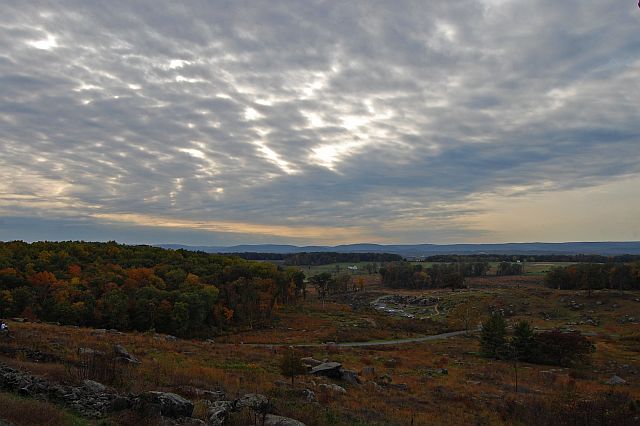 View from Little Round Top, Devils Den in Distance 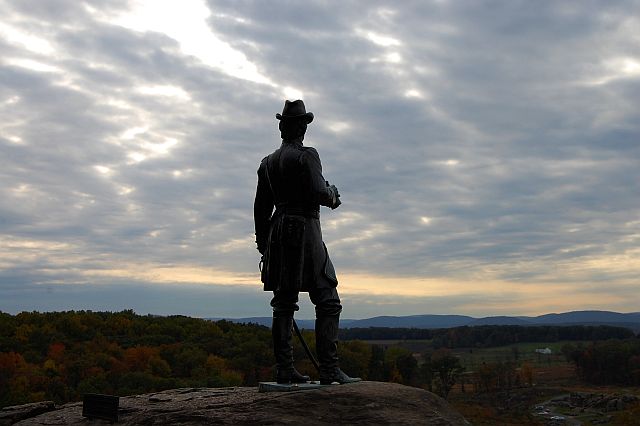 This arrangement of rock was irresistible to everyone except MsBoyink 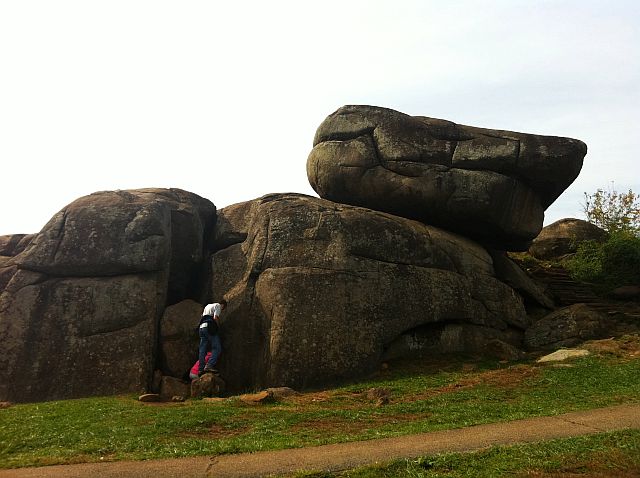 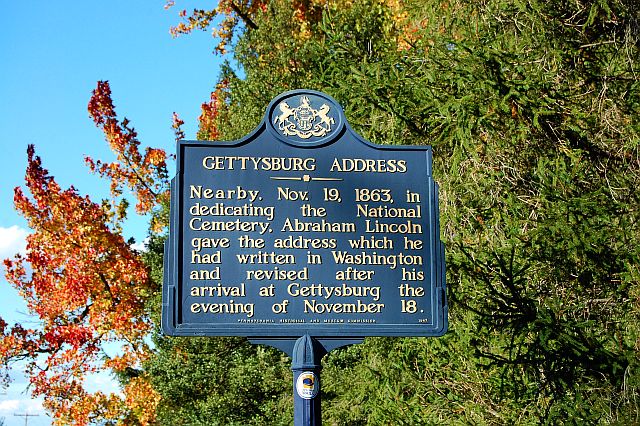 The location of the Gettysburg address was 1/2 mile from our campground. 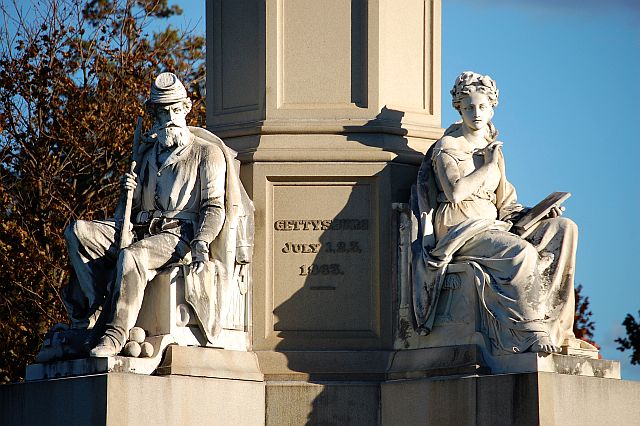 The Gettysburg Monument is a monument to Sorrow. 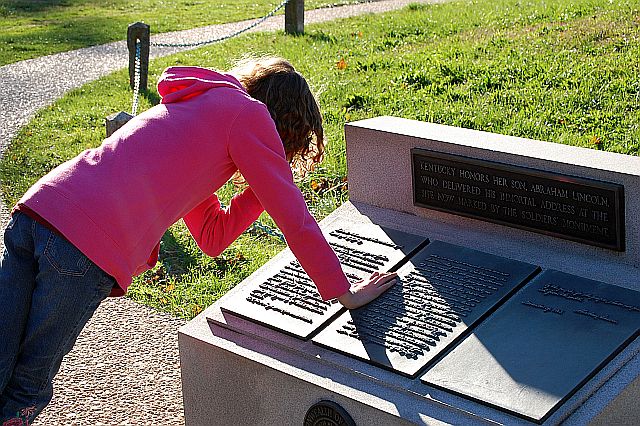 Storybird reads the Gettysburg Address in captured in Lincolns handwriting. 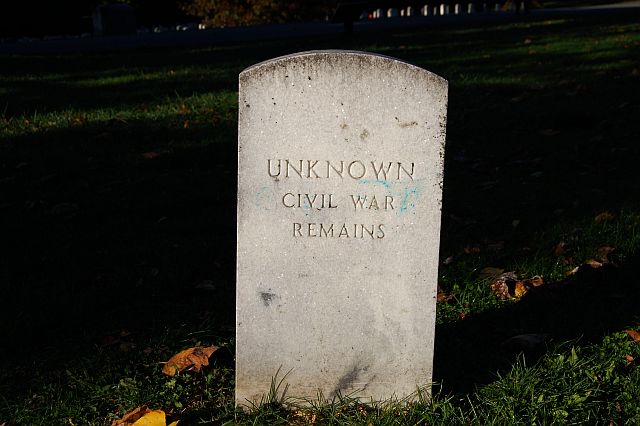 Many, many markers are of unknown soldiers.