by Crissa Boyink on 11/10/15 in Lessons Learned • RV Lifestyle  •  Updated 04/26/16  •  5 Comments
Disclosure: This post may contain affiliate links wherein we get a small commission at no cost to you when you make a purchase by clicking on our links. 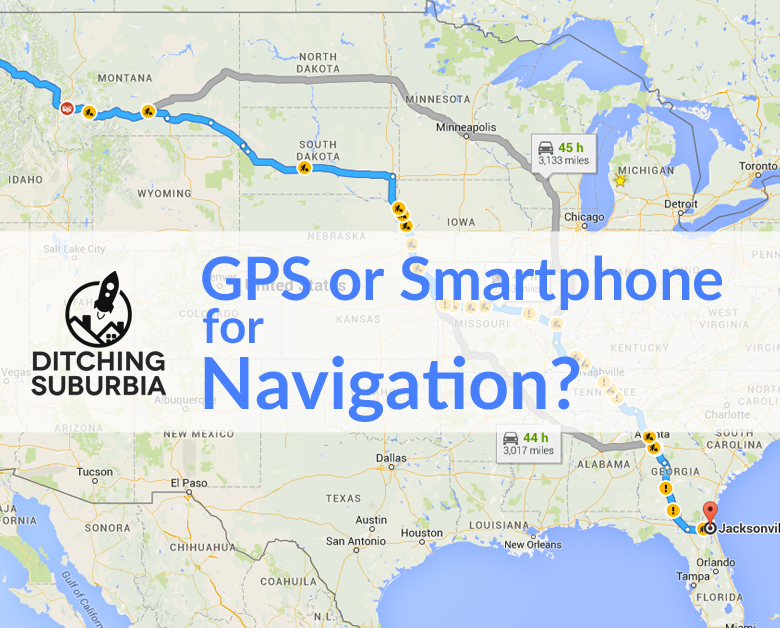 Is it still worth owning a dedicated GPS for Navigation?

How minimal is too minimal?

Since we started our fulltiming family adventure in 2010 we’ve used a dedicated Garmin GPS for navigation.  We nicknamed the GPS “Ferguson” in the manner of Mark Twain’s use of the name for ever-changing local guides in Innocents Abroad.

We’ve talked to other fulltime travelers who just use their smartphones and wonder why we - as self-proclaimed minimalists - would keep a single-purpose device around when we already owned a multi-use device?

We didn’t think much about it. We had Ferguson (and had named him even), he didn’t take up much room, so we kept on using him.

However, Ferguson was recently stolen (ironically, not too far from the like-named city in Missouri) so I’ve been forced to rely on our iPhone.

It’s been a mixed success and we plan on replacing Ferguson soon.

Here are our top five reasons for using a dedicated GPS:

Most travel days, I am working out our route on the GPS while Mike responds to emails and other work related things on his phone. Or I’m using campground-finder apps and then calling campgrounds on his phone while he follows Ferguson for navigation.

Without Ferguson we find that we’re both reaching for the phone at the same time and having to play “task triage” for who goes first.

Yes, an additional smartphone would be an option here but that would also add more monthly fees and another device to manage.

With the GPS we are able to see further ahead than while using the smartphone. This lets me anticipate upcoming intersections/turns/traffic/etc and communicate those issues to Mike while he’s driving.

We are also able to see more side-to-side, handy for figuring out ‘where’s the river now’ on our trip down the Great River Road.

With our iPhone running Google Maps turn commands come later than the Garmin.

If we are just driving the truck we can usually adapt but with the RV in tow we need a few more seconds warning.

Yesterday while using our iPhone & Google Maps we missed a turn as the directions on the map were unclear.

Google wanted us to make a U-turn at large intersection in downtown Memphis rather than routing us around the block.

It wasn’t even a move we wanted to do in the truck in slow traffic. It would have been impossible with an RV in tow.  The Garmin seemed to be smarter about rerouting us around the block.

While enroute Ferguson would show us additional data that was useful. We learned that “time to arrival” was too agressive to rely on, but have used “remaining distance” to help us predict when we’ll be done for the day.

Which Option Is Right?

I don’t think there is a definite right or wrong. Each traveler will have to figure it out for themselves.

For us, a dedicated GPS unit is the right choice (along with paper atlases and occasional use of the iPhone and Google Maps).

I can’t wait until we get a new Ferguson.

Which Do You Use?

Do you use a dedicated GPS or a smartphone for navigation?

We purchased a Garmin Nuvi 2698 and are quite pleased with it as the new Ferguson.

5 Comments → Why We Still Use a Dedicated GPS for Navigation