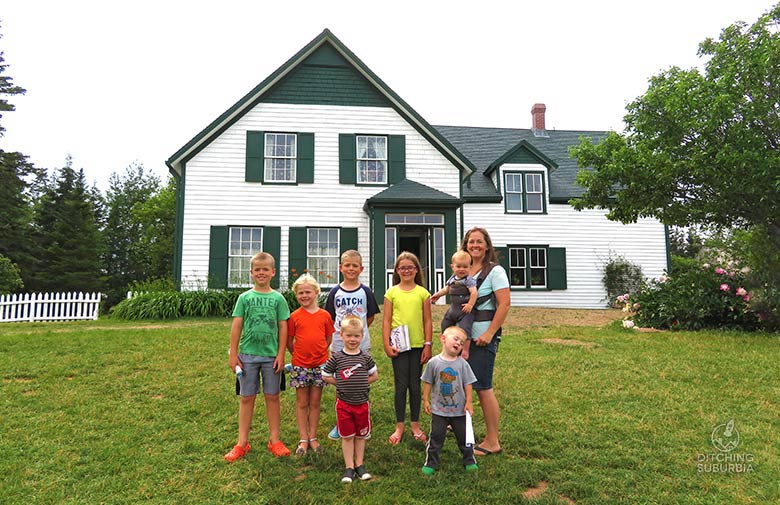 Tabitha and the kids standing in front of Green Gables.


Disclosure: This post may contain affiliate links wherein we get a small commission at no cost to you when you make a purchase by clicking on our links.

Editor's Note: This is a belated post from the Summer of 2019. We've been to many places that we are only just now getting around to writing about.

I went looking for my dreams outside of myself and discovered, it’s not what the world holds for you, it’s what you bring to it.Anne Shirley 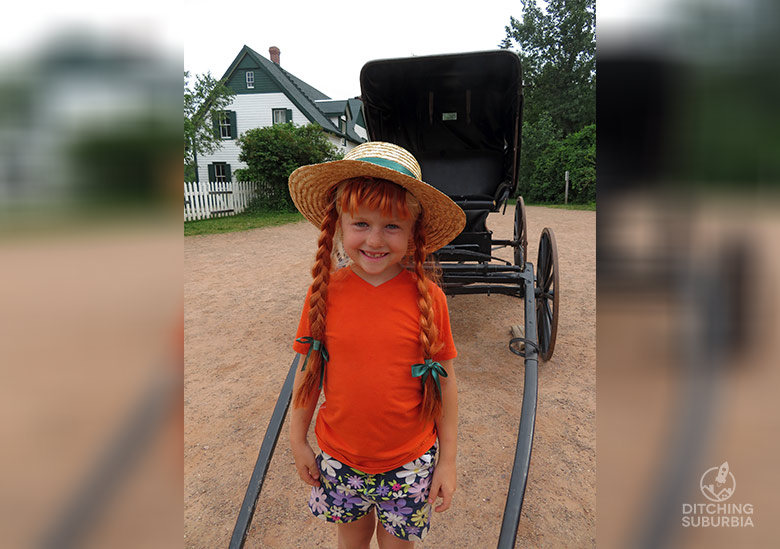 Evelyn wearing a fake hat and hair. Or is she Anne herself?

I didn’t grow up reading the Anne of Green Gable series, or watching the famed 1985 PBS movie or the sequels that many fans have grown to love. I learned to love the sweet but feisty red headed girl years ago when I had been lent the complete collection of Lucy Maud Montgomery’s series and read the whole thing during downtime as a new mother. The setting and time period of these books was so different from life in our tiny apartment, so it was really fun to escape the city and journey to the rolling hills of Prince Edward Island.

A few years ago, Matt introduced me to the PBS movies that he grew up watching. They are really good and the actors and filming locations in the movie made the whole story come to life even more. Apparently now there’s a modern version on Netflix, but we don’t want to watch it because the PBS version is so good and remakes often disappoint. The PBS version portrayed the island as such a peaceful place that it almost doesn’t seem real – but it is.

I never thought I’d actually go see the beautiful island that was the setting for Anne of Green Gables, but Matt had long lost family connections to the island so we decided to make it happen and see this beautiful place that was immortalized in the famous book. The whole island is beautiful and worth seeing, but if you are looking for the “Anne stuff”, it’s mostly up in the Cavendish area which is on the north end of the center section. There are other locations on the island that have connections to the characters and the author, but the Heritage Place is where the Green Gables Home is. 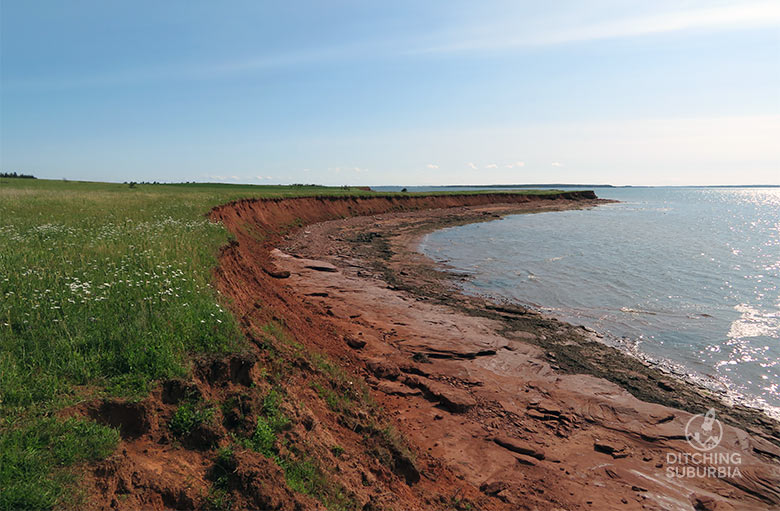 Beautiful landscape of PEI. No wonder Anne had wonderful things to say about it.

The Green Gables Heritage Place is part of the National Historic Site that’s been preserved by Parks Canada. Being such a big part of PEI tourism, there is quite a tourist draw to the area. We knew we wanted to go and figured that being touristy that it would be expensive. But Parks Canada really knows how to treat a large family right and has no admission fee for kids, and the adult price was just under $8, so it didn’t cost us too much at all!

After paying, we only briefly looked at the visitor center as we really wanted to get out to the grounds and make our way to the house. While walking the site, we heard there was a music show going on in one of the buildings at the place. We walked in and got our first taste of an afternoon ceilidh (pronounced kay-lee).

What is a ceilidh? The word is Gaelic and means a traditional Scottish or Irish social gathering. There is music and sometimes dancing. The music is fun and heartfelt and has roots in Irish and Scottish traditional sounds. This ceilidh at the heritage place wasn’t nearly as big as most of the island’s ceilidhs, it was just one singer with his guitar, but we still loved it. We sang along to familiar tunes, clapped hands to songs we didn’t know and learned a new song to sing along to. I can still hear the song in my head called, “Red Dirt Road.” It’s a different song than the famous one you might be thinking so I tried to find the artist on YouTube but was only able to find this version of the song.

Ceilidhs are such a fun thing and we loved that they provided us our first taste of one here. Imagine you are hanging out in your kitchen with your family and best friends, singing your favorite songs with everyone tapping their toes or dancing along. That’s the feeling of a ceilidh. If you ever visit PEI make sure you attend a ceilidh. They take place all over the island at community halls each week. They are fun for artists, locals, and visitors and are a part of the island culture.

Kindred spirits are not so scarce as I used to think. It’s splendid to find out there are so many of them in the world.Anne Shirley

The main focal point of the site is the House where the name Green Gables came from. The grounds are beautiful with flowers, white picket fences and the house sits at the top of a grassy slope that provides a great photo op.

You can take a self-guided tour of the green-gabled home which is great because you can go at your own pace. Anne is a fictitious character, but her adventures were inspired by the author’s visits to this home which belonged to her cousins. Enthusiasts will love that the exterior remains similar to what it was like back when L.M. Montgomery would visit as a child – white walls with dark green gables.

The interior is decorated with Victorian Period artifacts which our kids always get a kick out of – especially if they get to see a chamber pot. Several rooms are even named to match the Anne of Green Gables story. There’s even a room called “Anne’s Room”. If you are a fan of the book or the movie, you will love this place. It really is a step back in time and makes it hard to remember that there is a difference between Anne and her author. The fiction novel almost becomes real.

Life is worth living as long as there’s a laugh in it.Anne Shirley 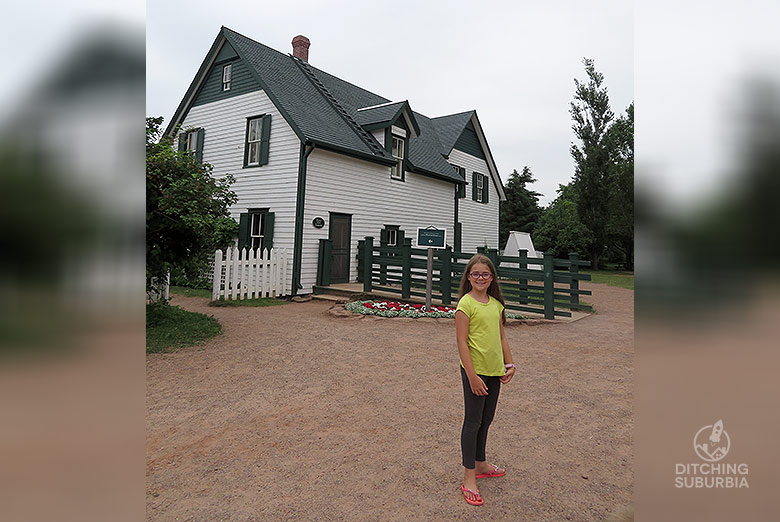 Lydia in front of Green Gables.

The grounds aren’t limited to the house and the surrounding buildings but extend out into the forest. There are two easy trails to hike on and are simple enough for our little kids. We started with a walk on the trail through the forest that inspired the “Haunted Woods” that Anne and Diana would walk through. Walking along the trail it was easy to see where it got its name. As the wind would blow through the trees above our heads, the trunks and branches would rub against each other, causing them to make strange sounds and if you use your imagination you might think the woods are haunted. Other than that, the woods aren’t creepy at all – they are actually lovely.

We also walked on the Balsam Hollow Trail. This peaceful walk is where the novel’s “Lover’s Lane” came from and as we walked, we tried to imagine Anne and Gilbert taking a stroll. There are plaques along the different portions of this trail with summaries and quotes of the inspirational sources for Lucy Maud Montgomery’s writings. The trail goes through a really beautiful wooded area that also has a small brook running through it. With much of PEI having been converted into farm land, this walk along the brook, through these preserved woods, was nice and helped us get a feeling of what the island was like long ago.

Down the trail we encountered a small wooden bridge. The kids posed for a photo and enjoyed a rare brief moment of quiet serenity as they stood and listened to the water roll over small rocks. Having now stood in these woods and listened to the sounds we feel closer to the story. Peaceful places like this open your imagination and calm the soul. It was nice to sit there and soak it all in. 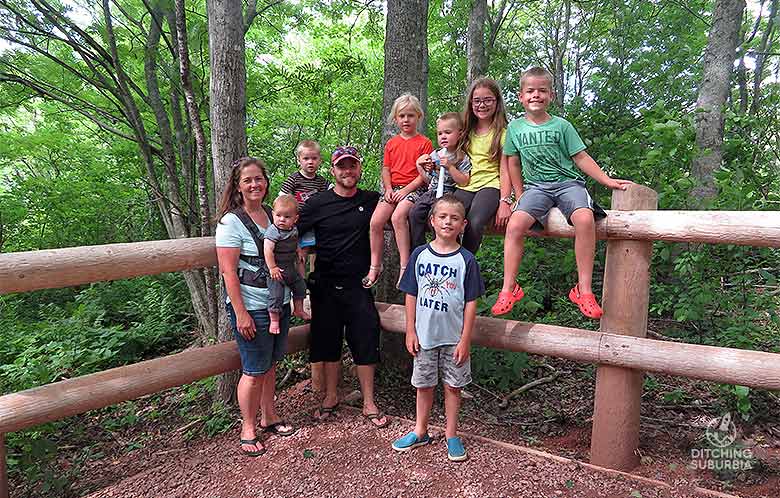 Family photo while on the trail. 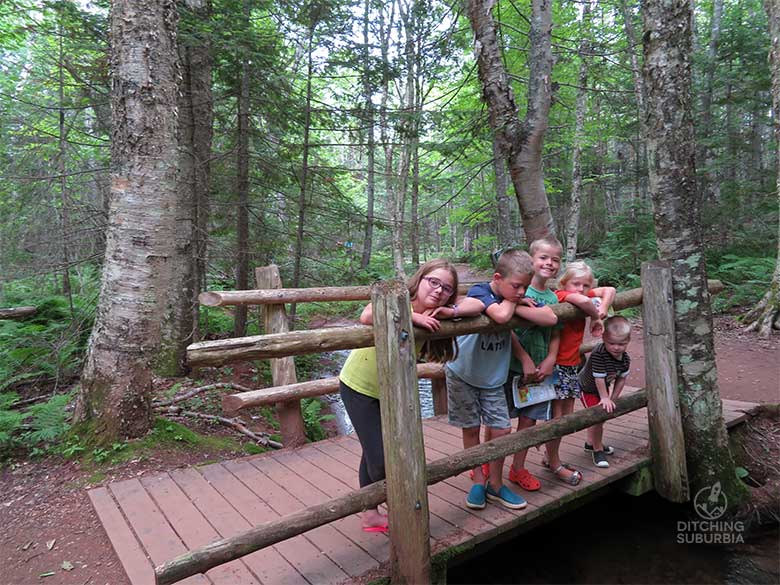 Kids on small bridge on the Balsam Hollow Trail.

“I don’t know what lies around the bend, but I’m going to believe that the best does.”Anne Shirley

Back at the visitor center

Our visit was coming to an end as it was nearing closing time. We headed back to the visitor center and took a turn down to an area we had just walked past before. The walls and displays are full of quotes from Anne and Lucy and we wish we could have spent more time reading them. We enjoyed what we got to, but since trails are really our thing, we think we managed our time pretty well. Only better thing would have been to arrive earlier in the day and spend more than just an afternoon with Anne.

Should you go to Green Gables?

Now that I have visited the island, it will always hold a special place in my heart. Just as the thousands of visitors each year find out, Prince Edward Island is truly a gem. It’s wonderful in so many ways and no visit would be complete without a stop to the place that inspired Anne of Green Gables. I’m still dreaming about when we can go back to the island.

If you are an Anne Fan, I hope you make a trip. Though it’s an island, there is a bridge and you can drive there and you won’t be disappointed with planning a trip to one of the most peaceful places we have ever been. Make sure you spend enough time there to soak the place in. Who knows, maybe you’ll catch sight of those bright red braids while you walk around the grounds, tour the house and enjoy a nice walk down Lover’s Lane. 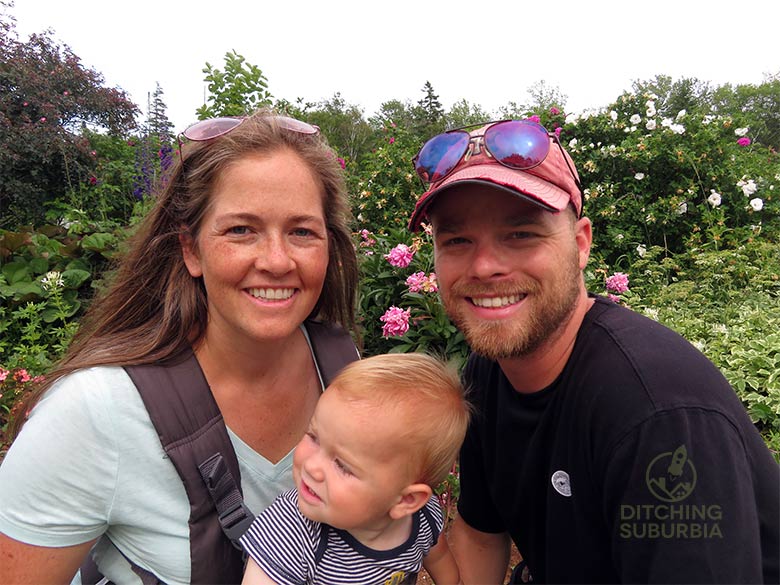 Matt and Tabitha (and Jonah) in front of the flower beds. 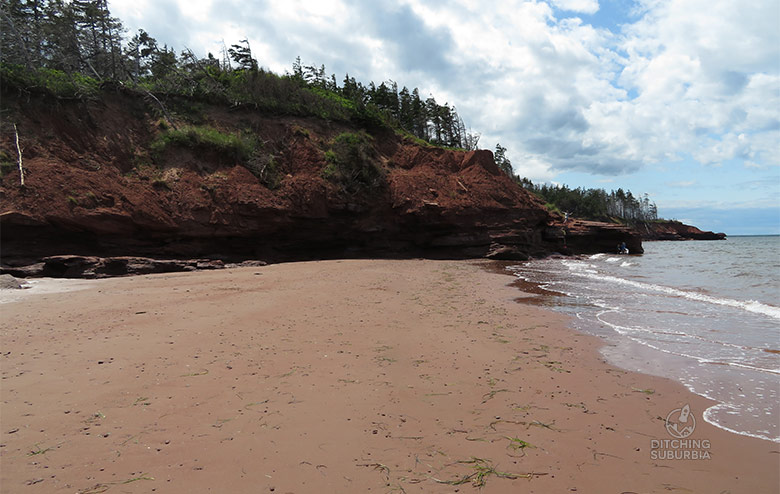 “One can’t stay sad very long in such an interesting world, can one.”Anne Shirley

Are you an Anne of Green Gables Fan? Tell me your favorite quote in the comments! 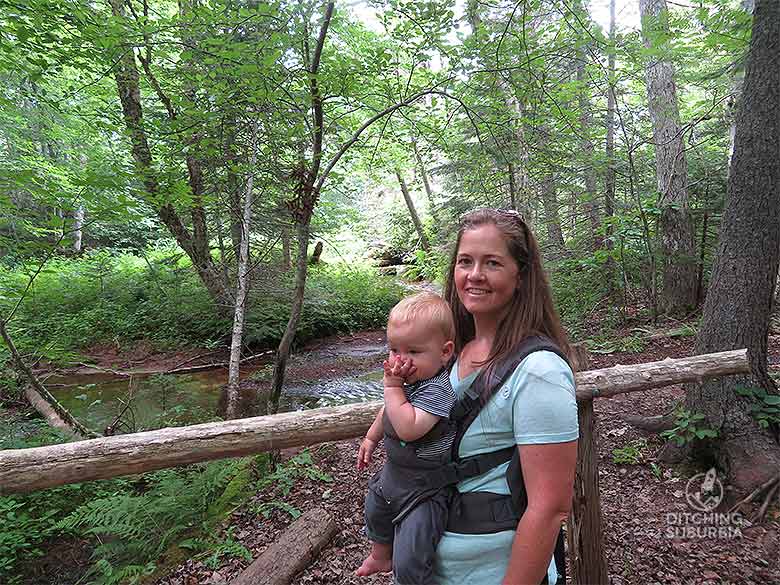 On one of the trails. 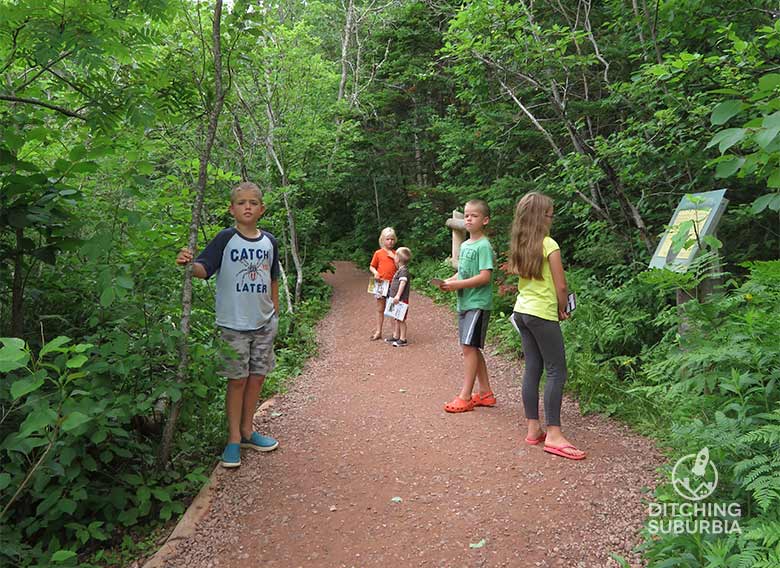 Kids reading signs on the trail. 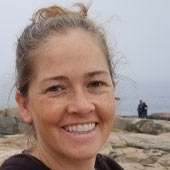