by Michael Boyink on 04/14/15 in Lessons Learned • RV Lifestyle  •  Updated 09/26/16  •  32 Comments
Disclosure: This post may contain affiliate links wherein we get a small commission at no cost to you when you make a purchase by clicking on our links. 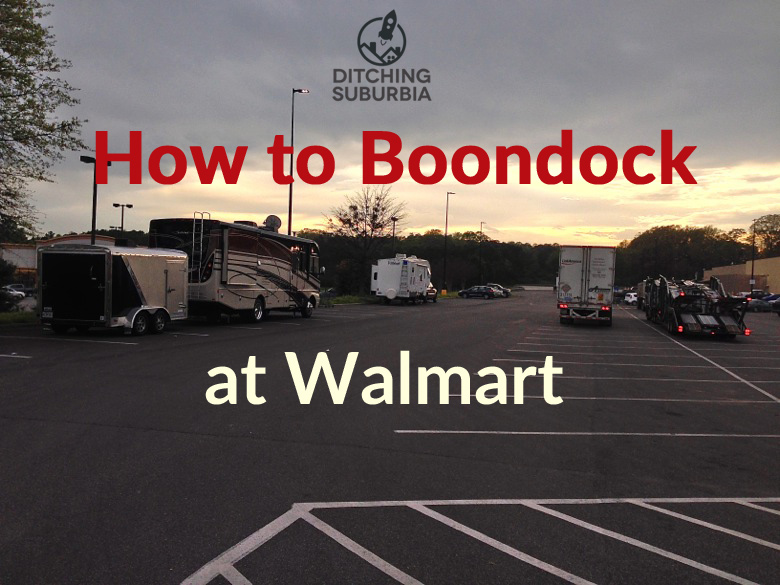 How to Boondock at Walmart

You’re on the move. House on your back. Making tracks from one spot to another. It’s been a long day and you need a few hours sleep. In the midst of looking around for campgrounds it strikes you - there are always RVs parked at the local Walmart. What’s that all about? Can anyone do that? Is it legal?

Mostly it’s your average RVer on the move from one region of the country to another.

Why Do They Do It?

Budget and convenience. By not paying for a campsite overnight you keep ~$30 in your pocket. Walmarts are easy to find and are usually highly accessible. RVs are usually self-contained so don’t need hookups for a simple overnight rest.

When Do We Boondock at Walmart?

Walmarts are an attractive option when we have two travel days in a row. After a long first day on the road we just want to roll in, sleep for the night and head out again for the second day.

We have seen people referring to this as “Camping at Walmart”. It’s not. People park their RV’s in a Walmart parking lot and sleep for the night.

We have never seen anyone with an awning out, chairs out, or cooking food outside their rig. We have only seen people out socializing if they happen to be traveling as a group.

Other than folks taking their dogs out or stepping into the Walmart to buy something we almost never see the people from the other RVs.

Here’s our basic process for boondocking at Walmart. There are many opinions on how to do this in the RV world and we don’t agree with all of them. I’ll explain why as they come up.

Note that I said opinions and not rules. There are organizations out there that suggest they have created rules for staying overnight at Walmart. These are, in fact, just more formalized opinions.

You can read the Walmart Policy for yourself and see that it has no mention of what others claim as “rules”.

While that sounds like the punchline to the old “how do you become a Millionaire joke” the reality is not all Walmarts allow overnight parking. The decision is left to the local stores and governed by local ordinances.

We start with the Allstays Camp and RV app. It lists each Walmart and indicates if it’s RV friendly or not.

We find a store using the app and read the reviews. If it’s listed as RV friendly, has good reviews and looks close to our route we’ll try it.

The general consensus in the RV world is that you should always call or talk with the store manager before tucking in for the night.

If the app leads us to think it’s a popular spot to boondock we don’t bother calling.

If we get to the Walmart and there are 6 other RVs (or semis) already setup we don’t bother inquiring.

If the app doesn’t make it clear that this is a popular Walmart for RVers, and if there aren’t already rigs in place, we will go in and ask before setting up.

We have never been asked to leave a Walmart once setup.

Pick Your Spot and Go

Driving into the Walmart lot we first scan the perimeter and look for spots.

Our ideal Walmart parking spot is along an edge, away from traffic, with some distance from other RVs. I want to park with the driver’s side of the truck on the outside of the lot.

My second choice is at the end of a row of spaces, parked across them lengthwise. I will park in these with my driver’s side to the inside of the row.

Why park that way?

Because our trailer slide-outs are on the driver’s side and I want to put them out.

Yes, you read that right.

We..I know this is tough to swallow…we actually put out our slides while boondocking at Walmart.

Did you hear that? That was the sound of our membership papers to several RV clubs being shredded. Not putting your slides out is one of the suggested “rules” for boondocking at Walmart.

I get it. It’s a courtesy spot. I’m not paying for it. I don’t want to “setup camp” or live there for a week. I respect the arrangement.

But here’s the thing. The RV world is dominated by retired couples with 2 little dogs traveling in large Class A motorhomes. Maybe their RV is useful for the two of them with all the slides in.

We need to put our slides out in order to use our RV. Without the slides out the bunkhouse bedroom is inaccessible from inside the rig.

Technically yes, we could feed the kids in through the little access door in their bedroom but really? Like they’re going to go back outside using that door and then come back in the main trailer door to use the potty? Fumbling around with a key at 2:30 AM?

Legs Up or Down?

So if I haven’t completely alienated myself from the rest of the RV world yet let me just make sure to complete the process.

We also put our trailer stabilizer legs down.

Again, maybe the retired rule-writing RVers can still sleep well without putting their stabilizers down.

Try that with two teens in bed at one end of the trailer while you lay at the other end.

Without the legs down if one kid rolls over in bed the rest of us do too. Whether we want to or not.

I get the intent of the general opinion here too - we don’t want to damage the surface of Walmart’s parking lot.

With our lighter weight fifth wheel using blocks under our legs we aren’t impacting the parking lot by our use (we just won’t mention those half-dozen fully loaded semis that always seem to surround us when overnighting at Walmart). 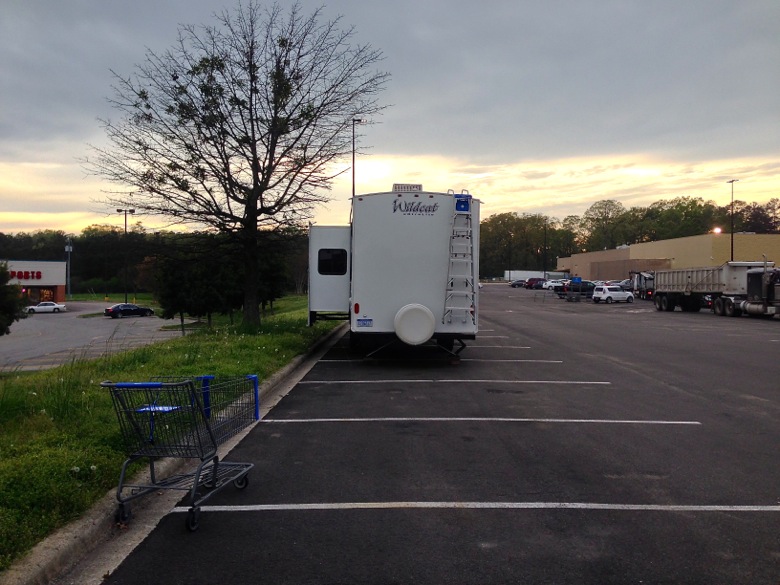 Our favorite spot - on the side, slides out over the grass.

Rear legs down - but using blocks 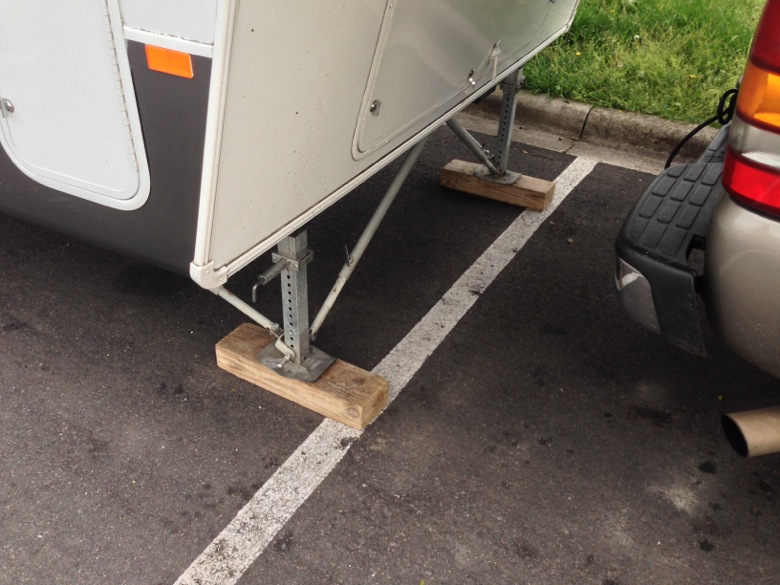 Front legs down on blocks as well. 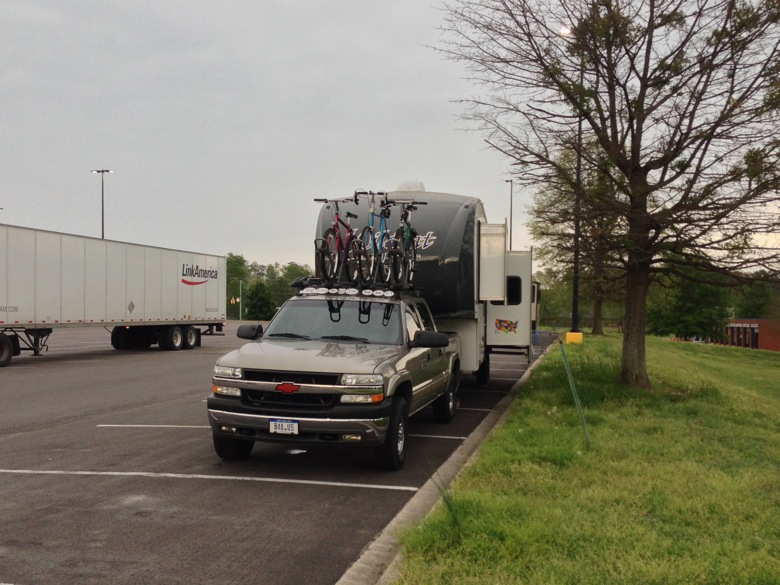 Tucked into a Walmart for an overnight stay.

When at Walmart we do a minimal setup - what about at a campground? Join our newsletter and download our How to Setup Your Fifth Wheel Trailer in 20 Minutes or Less 10 page eBook.

Do We Ever Unhook the Trailer?

And we have seen unhooked and unattended Fifth Wheels or bumper pull trailers at Walmart.

But we would never dare do that. It’s our house. Our Home. Most of what we own is in there. Even with a hitch lock I wouldn’t feel comfortable leaving it behind in a strange parking lot.

We have avoided some Walmarts based on reviews. We have left others because of high traffic, awkward parking arrangements, or just a bad vibe.

While recent news about a shooting at an Arizona Walmart might have you thinking overnight parking at Walmart isn’t safe, there are over 4000 Walmart stores in the USA.

That was one incident at one Walmart and didn’t involve RVers. The odds that you’d get caught in a situation like that are very small.

If we drove in and saw people apparently living in their cars in the parking lot we’d most likely move on. That’s not a scene we’d be comfortable with.

We’ve never had a single issue in dozens of Walmart stays.

Just the one overly enthusiastic security guard in Texas.

Do We Sleep Well?

We have been at some Walmarts where they like to clean the parking lots starting at 10:30PM. The drivers of those cleaning machines start out by doing donuts around all the RVs for about 20 minutes. Once you are good and awake they move off to do the rest of the parking lot.

Early on in our travels I felt like I had to be on “safety watch” while the family slept.

These days I worry less so sleep better. Still not as well as in a campground - Walmart lots are usually well-lit and the light will keep me awake. I made window covers from reflective insulation that I use to darken the room.

The rest of the family always seems to sleep great.

We do find that using a white noise app helps mask some of the parking lot sounds. Our powered vent fan also adds white noise while moving air through the bedroom.

Do We Always Buy Something?

A friend once told us:

Walmarts are the most expensive free camping you will find.

We don’t purposefully go spend money to pay for our site.  But invariably we need something and we might as well get it while we’re stopped down.

We’ve come a long way since our first boondocking experience where we played by the so-called rules and had a terrible night of sleep.

Tell Us Your Walmart Experience

Do you boondock at Walmart? Hate them because of a business practice? Hate us because we don’t “do it right”? Seen someone totally “camping in the parking lot”?

32 Comments → How to Boondock at Walmart