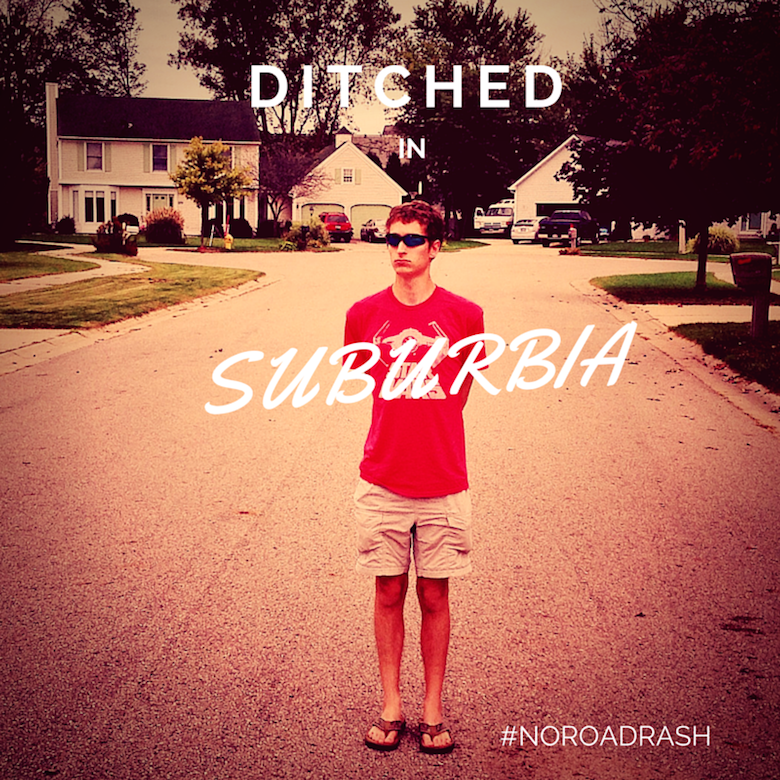 Having a bit of fun with the boy.

I’ve been putting this post off for a while, but it’s time.

And I’m not even quite sure what to say.

Do I paint a picture of what it’s been like to raise this boy?  Do I dig through the deep archives and find photos of him as a baby sleeping on my stomach? Photos of him as a toddler, holding his newborn baby sister? As a tween, helping me work on projects in the garage?  As a teen, his age our reason for a major lifestyle change and hitting the road?

My emotions are still too raw to go there.

The past few days have been busy with projects and broken laptops and route planning and other family…and I just haven’t had (or taken) the time to sit and let the moment flow through me.

I haven’t processed what it means to be less one kid. To be the “three of us” after 17 years of being “the four of us”.

And I know - he’s not dead. He’s a text away, a phone call away, a Skype session away.

But things are different. And we’re figuring out what that difference looks like.

Setting aside the emotional part of things - we know that most suburbia-ditching families have younger kids, and wonder (or worry) about what those kids will do when they want to move out on their own.

So let’s fill you in on that first.

What Harrison is Doing

Harrison took a fulltime job with HermanMiller, a West Michigan-based Fortune 500 manufacturer of office furniture (including the coveted Aeron chair). He’s working on an assembly line, one of a team that assembles the Setu chair.

The job market here in West Michigan is crazy - every large company is hiring. HermanMiller was doing open interviews for direct-hire jobs, so once Harrison made it through the interview process he started on day one with a nice benefits package.

Where Harrison is Going to Live

An active job market means a tough housing market - we were worried about getting him a place to live that didn’t eat up most of his income.

God was so good in this regard - we tapped our existing network in Holland and found him a room to rent with a young family in town. He’ll have kitchen, laundry, and wifi available for less than half what an apartment would cost.

MsBoyink and I are so much more at peace with this situation than some alternatives we were looking at earlier this year.

At peace…but still a bit amused that Harrison’s post-travel life looks a lot like what people come to Ditching Suburbia to learn to get out of.

House in the ‘burbs and working for the man.

We joked that he could become an undercover agent for Ditching Suburbia…launched there secretly to learn what people are doing and subversively suggesting there are other lifestyles out there.

Harrison is determined to figure out his life on his own terms and we’re OK with the fact that the results will likely not look like our lives.

We know - the American formula calls for kids to go to college right away after high school.

It’s a good way to flounder around for a couple of years while you figure out what you want to do or who you want to be.

And rack up a bunch of debt in the process.

Harrison didn’t really have a direction for college yet so chose to start working. One of the benefits of his new job is that after 6 months his employer will cover 100% of college tuiton and books.

When Harrison decides to go to college he basically has a version of a full-ride scholarship - he just has to stretch out the college process a bit while he keeps working.

That’s the basics of how to launch a traveling teen with a minimum of roadrash. One way anyway.

What’s it like to say goodbye to your oldest and drive away?

I had kinda scripted the whole event out in my head. I knew the kind of photos I wanted to take and which camera I wanted to use to take them.

The timing was all set. We’d work as a family to finish a project we’ve been wanting to get to all summer (washing and waxing the RV), do some grocery shopping for Harrison, then bring the groceries and the last of his stuff over to his new room. We’d say our goodbyes and be done with this emotional moment we had all been sort of dreading.

The Wrench That Was Thrown

During this time my laptop started having issues. We had to add an hour-long drive to our day to get it to an Apple store so that we could hope to get it back before we wanted to leave.

It was too much.

We did the RV work, the grocery shopping and got Harrison and his stuff over to his room. But we were all exhausted, tense, and still on a schedule to get my laptop dealt with.

Attitudes weren’t right and it just wasn’t the note we wanted to end on. We scheduled another night for a ‘final goodbye’.

Another Night, Another Shift

When that night came our plans were again shifted so the night didn’t play out according to my “script”. I ended up without my good camera so the photos aren’t what I had envisioned.

I still tried to capture the emotions being felt (and yes, I hugged Harrison as well but the camera didn’t change hands fast enough to capture that….again, shifted plans). 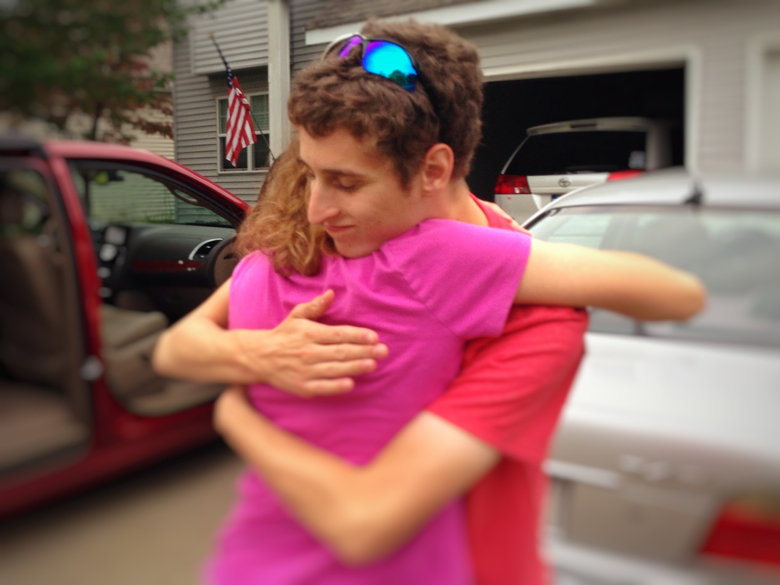 A moment of growth for both of them. 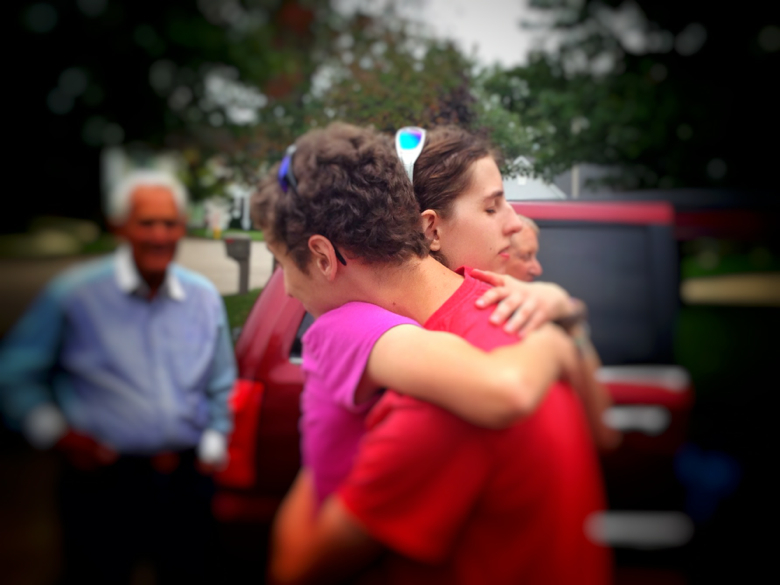 Miranda saying goodbye to her big brother and roommate of 5 years. 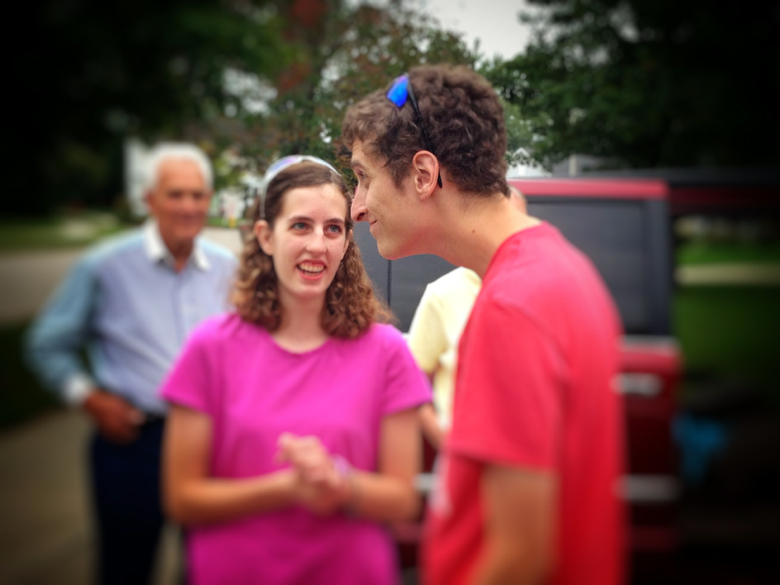 A bit of sillyness to break the tension. 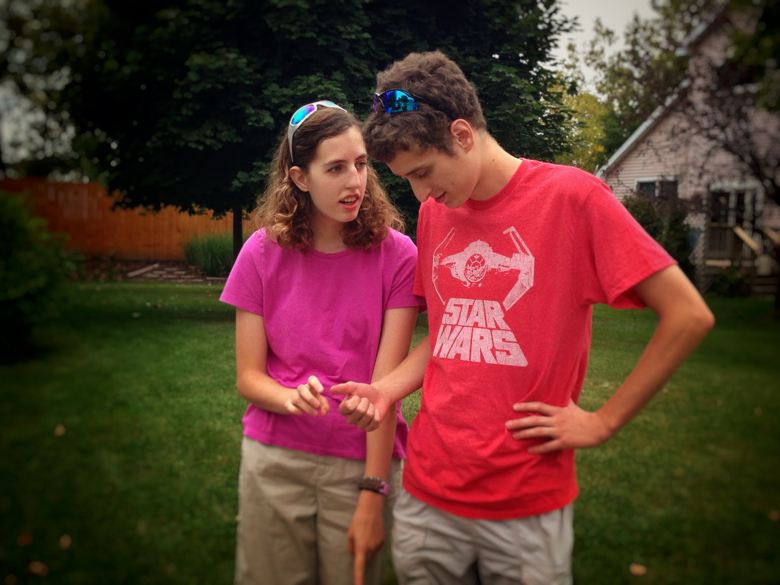 I think she is claiming his right arm as hers to keep. 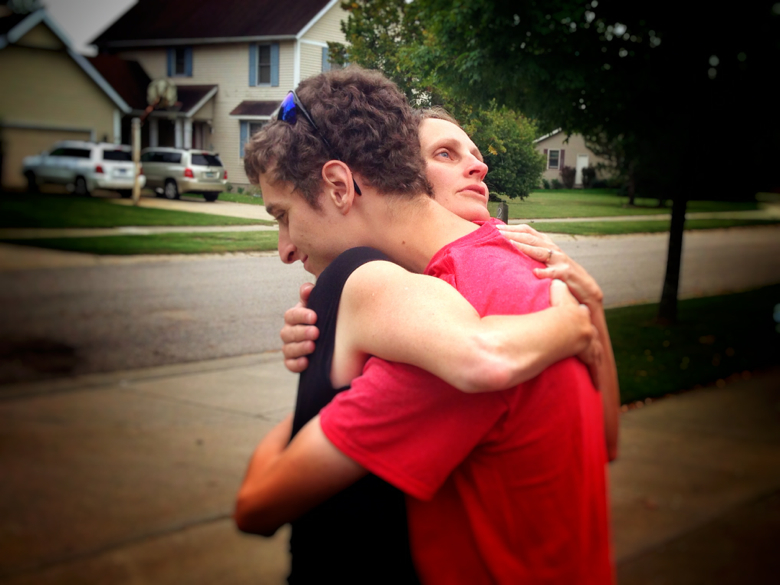 A last Boyinks 4 Adventure picture as the family transitions.

It Hasn’t Been a Week

It hasn’t been quite a week since we said our goodbyes. We packed up the RV for a move and felt Harrison’s absence as we had to take over tasks he used to handle. The girls are stepping it up…but I still have moments where I feel the loss of my right-hand man.

We’ve realized we need to establish some new norms for how to communicate with Harrison, and how often to do that. We’ve texted a bit, traded Facebook messages, and had a strange-feeling phone call.

He’s already busy with some after-work events, some church-related events, and establishing some friendships in town.

It’s all so new yet - but we see Harrison enjoying his new-found adulthood and independence, taking it seriously, and being responsible (while at the same time commenting on how strange it all seems).

And we’re proud of that.

10 Comments → Launching a Traveling Teen Into His Solo Life