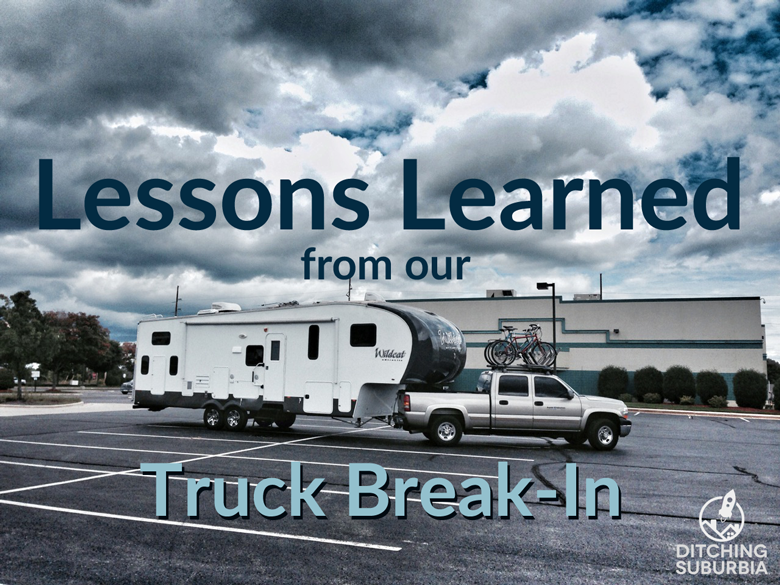 Lessons learned from our first experience with vandalism and theft on the road.

Last week, while we were enjoying a bike ride over the Chain of Rocks Bridge, someone broke into our truck.

This was the first time in 5 years of fulltime RV travel that we have experienced any theft or vandalism.

We take responsibility. We ignored our gut feelings while parking the truck and getting the bikes down, and got carried away trying to get a bike ride in on a nice day.

We quickly accessed the damage to the driver’s door and inventoried the items missing (totalling around $700). I called 911 to report the vandalism and theft. MsBoyink followed up with a call to Progressive to make a claim on our auto policy.

A Progressive claim rep called the next day. She would handle the damage to our truck and also replace any items that were “bolted down” - which one item was.

She made it clear that the other stolen items were not covered by our auto policy. She suggested I contact my homeowner’s insurance company for coverage on those.

The auto rep evidently only had visibility of our auto policy - she was unaware that our “homeowners policy” is also with Progressive.

I use quotes around “homeowners policy” because we don’t own a house. Instead we have a “Fulltiming” RV policy. We opened a second claim on that policy to cover the stolen goods.

Later that day a second Progressive rep called to tell us that our RV policy does not cover items stolen from the truck.

So two insurance policies and neither one would cover the stolen items.

I’ll admit - we were feeling victimized in more ways than one at this point.

We contacted our insurance agent. He was as surprised as we were to hear that our truck contents were not covered.

The key point of contention seemed to be:

It was vandalism & theft while our truck was not attached to the RV, not parked by the RV, away from the campground and not on land we owned.

Our agent got involved as he didn’t feel that described the policy that he sold us (and other fulltime RV clients). He thought the truck contents should be covered by our RV policy. He both promised his agency would “make it right” and also went up the chain of command at Progressive.

After review Progressive decided to cover the truck contents under the RV policy. They also waived the deductible (for our hassle), and (according to our agent) will be rewording the policy to make it clear that the contents should have been covered to begin with.

Expect some limitations - per incident and per-item, but that seems reasonable.

In the end we’re satisfied with Progressive as an insurance provider. They acted quickly to get the truck repaired and have been flexible in handling our case.

We started with Tom at Meyering Insurance in Zeeland, MI when we first started fulltime RVing - our previous agent just couldn’t get proper coverage for us. Tom’s been great at coming to our aid during this process.

These guys rocked - we dropped the truck off to Carstar in Bridgeton, MO on a Tuesday morning and had it back on Thursday noon. They had a loaner car for us to use and handled all aspects of the process in a timely and professional manner.

Have You Been Vandalized?

What did you learn from it?