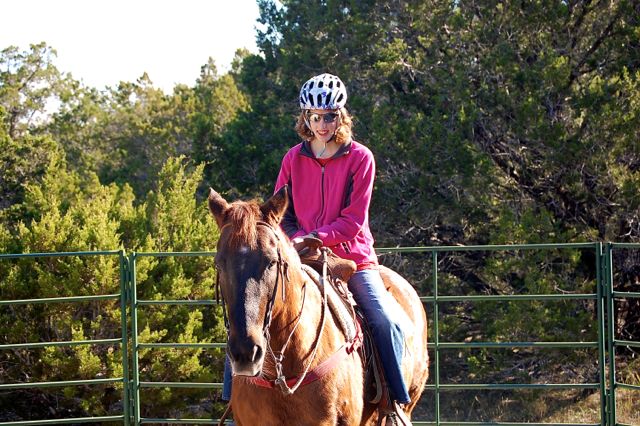 So yes. The farm. Where do I start? Is there a place to start? I guess when we drove in…

My stomach was filled with caterpillars, cocoons, and butterflies. The whole nine yards. I was excited to see our farm, and nervous that it wouldn’t be where we wanted to stay. I already knew it was where I wanted to stay. As we drove further in, I saw a horse, a dog, and a person. The horse was a beautiful auburn color with a black mane and tail. The dog was a black lab, and I knew from the e-mails that his name was Cole. And the person was Mark. Cole was barking at us, and Mark said, “Quiet, Cole, they’ll think you’re vicious.” We climbed out of the car, and horse came over to us. He was BIG. He wasn’t like the miniature horses I learned about when I was eight. This was a HORSE.

“I’ll climb in the golf cart and show you your spot,” Mark said. So we got back in the truck, and he and Cole drove down to where we were.

We set up, formal introductions were made, and we were shown around the farm. I was trying to keep track of everything in my mind, but the only thought that came through clearly was, “DON’T GET LOST.” Farhaven seemed like a very big place to me. I hoped that I would learn how to get from one place to another.

We were shown the garden, and Mark had me and Harrison pick some green onions to bring to Nancy. So was my introduction to Nancy. Since we were almost done with the tour, I decided to stay inside the house. Besides, I had already figured I would be working with Nancy most of the time. Sure, there was a cute little poodle (Cinder) who liked to sit on laps, but that wasn’t the MAIN reason I stayed in the house.

Nancy and I talked a bit while she made dinner. I liked Nancy. We talked a lot about the horses and the other animals, and the church that was there, and the small town of Utopia.

As our time there progressed, I was given jobs. I fed the ‘feral’ cat, Turtle, every morning. I had to scoop poop in the paddocks every day. I didn’t mind this job very much. I became accustomed to the horses that way. My favorite horse was Upbeat, who was the Dutch Warmblood that greeted us the first day. I figured out his favorite song, ‘May the Horse Be With You’, and sang it to him while he worked.

The first full day we were at Farhaven, before I had so many jobs to take care of, I walked up to the arena to watch Nancy and Mark. Mark’s horse, Remmington, was half Thoroughbred and half Percheron, so he was pretty much the biggest horse on the farm. Mark asked me if I wanted to sit on him, and pretty soon I was walking around on Remmington. He was very tall, but I tried to calm my nerves. I learned to walk and trot on Remy.

Nancy got me hooked up with April, who worked on a really big beautiful place called Lonehollow. I learned to ride there, too. The first horse I rode was an Appaloosa. The horses they had at Lonehollow were a lot smaller than the ones at Farhaven. April taught me to canter my last lesson. It was lots of fun.

And Cinder… she was just so cute and fun to have for a little while. I loved to cuddle her and hold her. I miss her a lot. But I think I miss Upbeat the most. One cold day when I was doing his paddock, he came up to me and licked me all over. I didn’t find it gross at all (though I know my mom did). I was actually very thankful to Upbeat, because his tongue was warm and warmed me up. I asked Nancy what it meant and she said, “I think it means he likes you.” Which was good. Because I wanted him to like me. I knew I wouldn’t ride him. He was a little insecure, and had some problems. Nancy and I think maybe he has autism to ADHD to something like that.

I never got kicked. I never got bit. I never fell off. I was pretty safe around the horses, and I liked that.

Oh yes, and Paris. She hated me the first week we were there, and then decided I was the greatest thing since tuna Friskies and climbed into my lap when I sat down. I liked having a warm kitty on my lap, except when she stuck her claws into me. That hurt. But I miss her too.

So that’s pretty much my experience on the farm.

For Harrison’s birthday, we went to San Antonio, and I was pleased to meet a friend from my biology class, Royce, and his family. It was their first time in San Antonio, so we kinda showed them around. It was really fun to talk to Royce and interact with him without having to use a keyboard. He wants to get together with me again if we ever come his way. But that was really cool.

I hardly wrote a word on the farm. I was too busy working and running errands and basically enjoying myself. There was so much more we could’ve done there if we just had the time. Maybe I would’ve learned how to jump. But I’m not going to give up on horse riding now. Mark and Nancy say that Florida is big horse country. Maybe I can strike up a connection there.

Just like I had trouble starting, I’m having trouble ending. But I resolve my problem the way I resolved my starting problem.

I had just finished saying goodbye to all my furry friends and we were driving out. As we passed under the sign and through the gate, the reality struck me that we were actually leaving. We were leaving and weren’t going to come back. That was probably the last time I would ever see Upbeat, or cuddle Cinder, or hear Cole groan as I fussed with his ears. It was really sad to me, but I also felt a sense of freedom. We were going on to new adventures, and who knew what those would be? 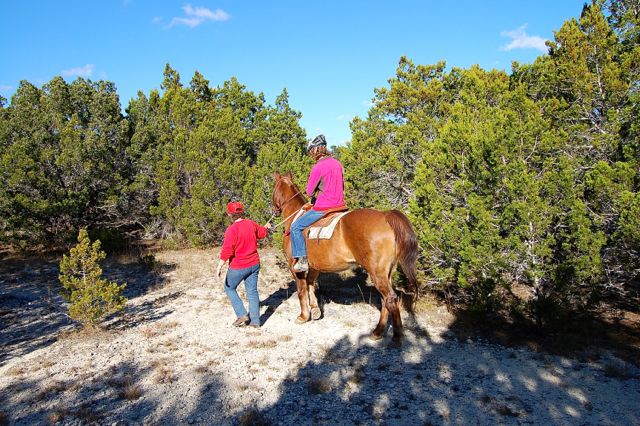 Going down the trail 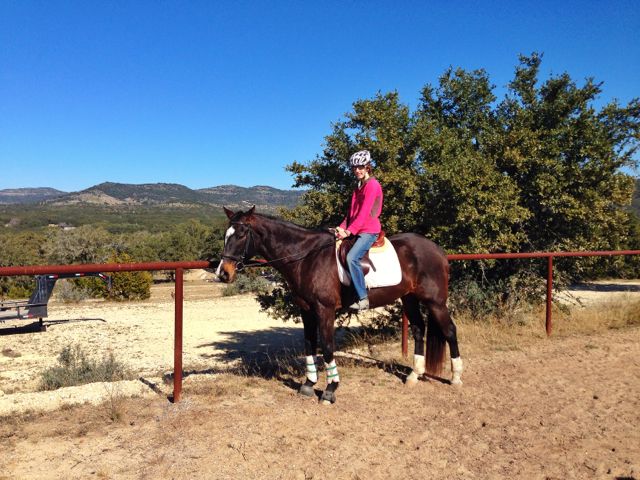 Sitting on a horse that went to the Nationals 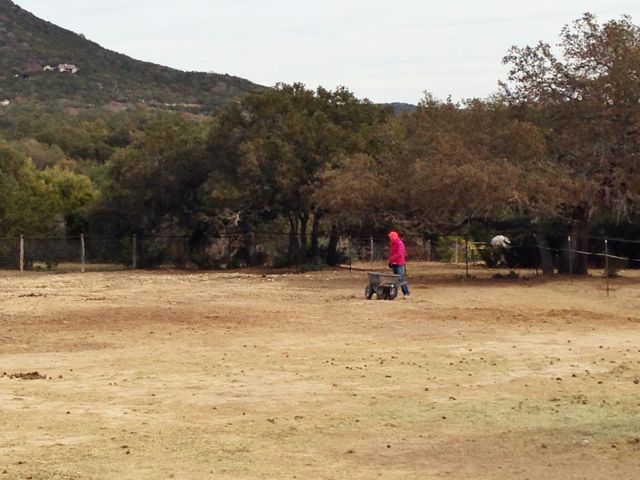 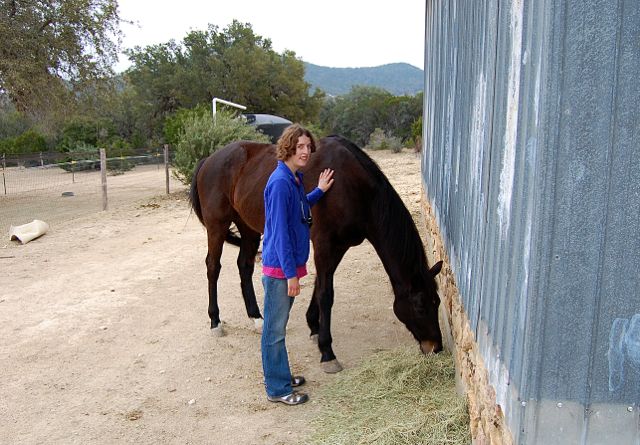 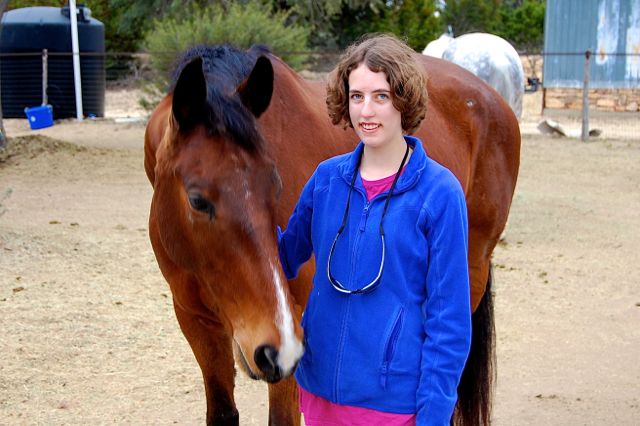 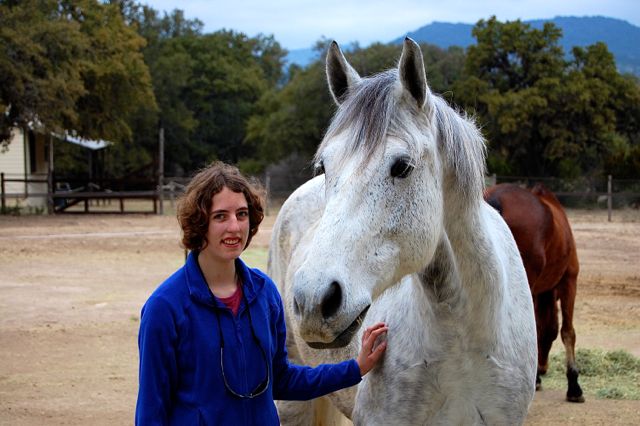 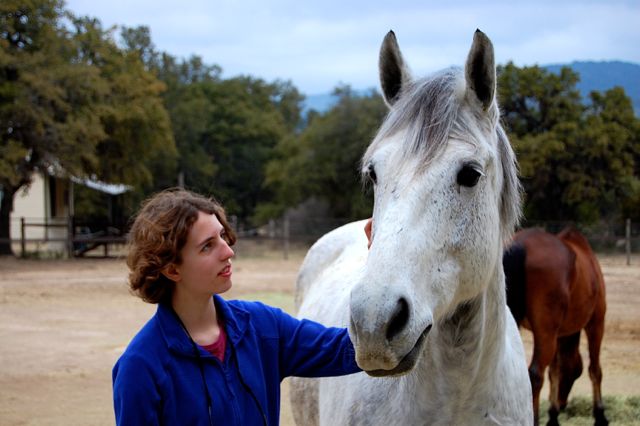 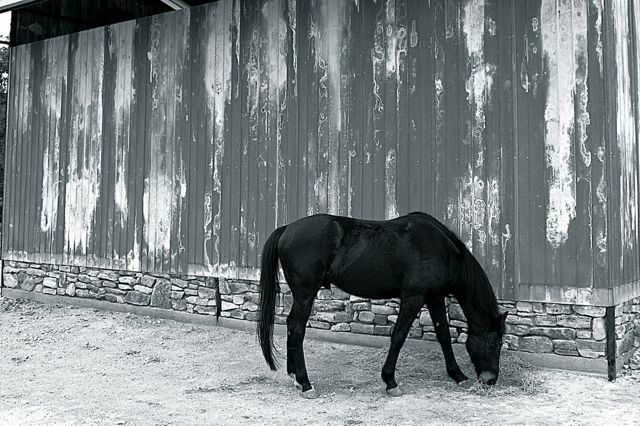 Black and white of Jack 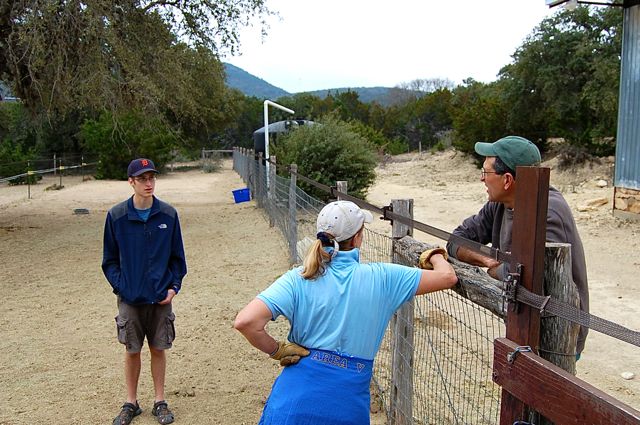 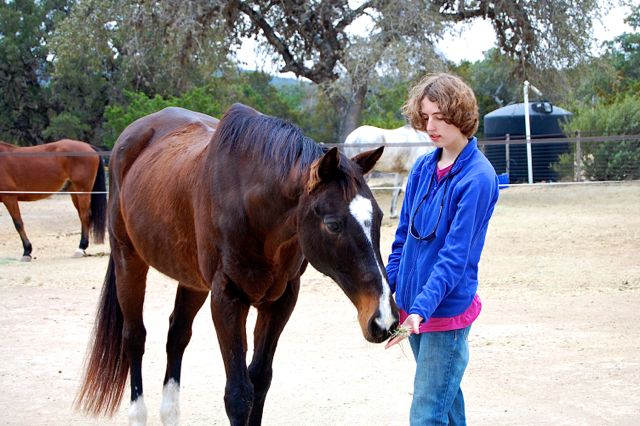 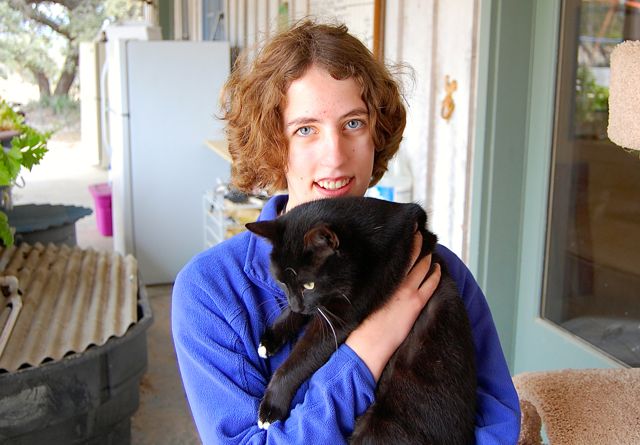 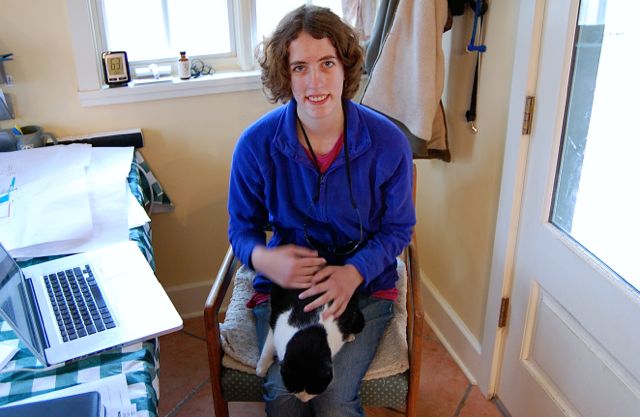 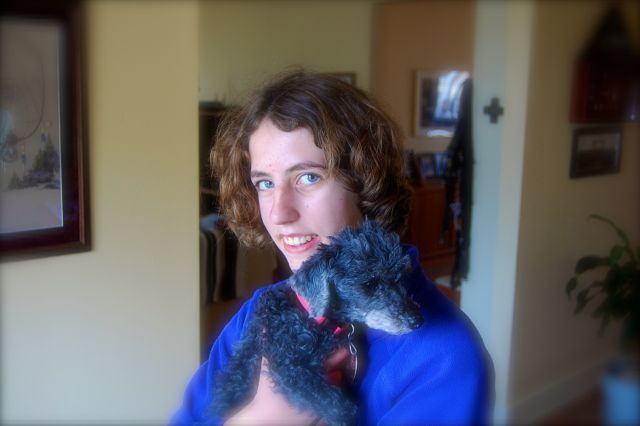 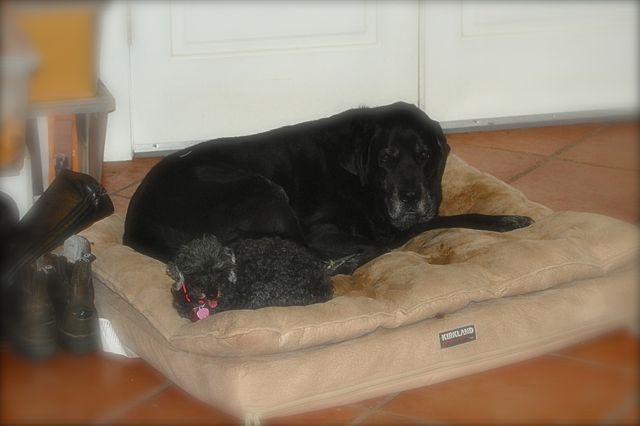 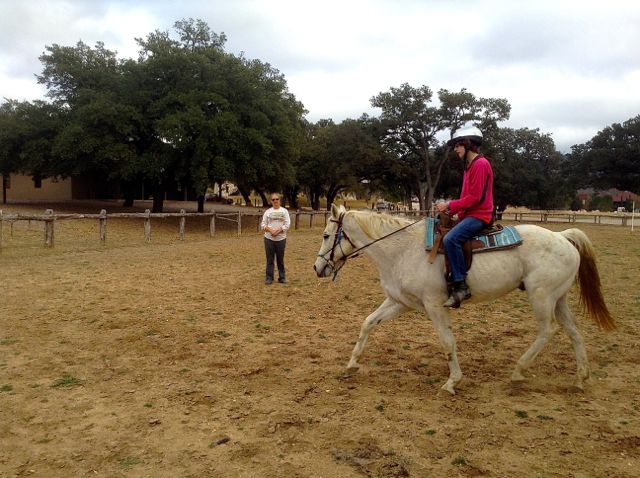 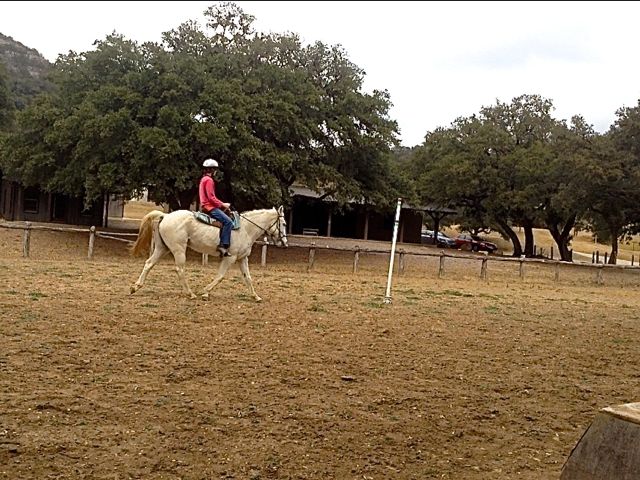 3 Comments → Miranda’s Take on the Farm