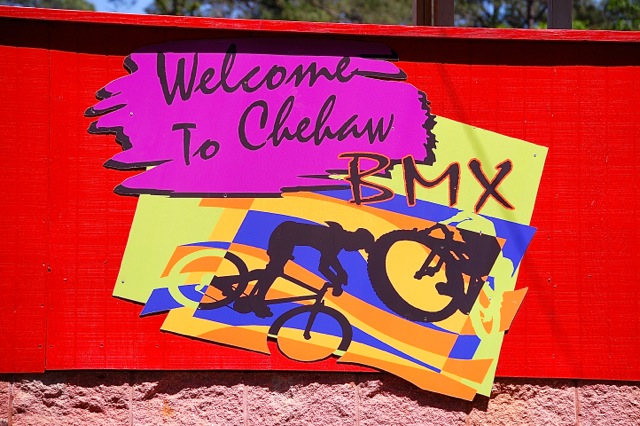 I’ve been interested in BMX racing ever since we visited Chula Vista’s Olympic Training Center and I saw some BMXers practicing there. I added ‘Practice BMX Racing’ to my bucket list, and figured I might have a chance when I was 35.

Except the park we stayed at in Chehaw has a BMX course.

I was really excited about going on the BMX course with my bike, but Harrison wasn’t so thrilled about it. “It’s a BMX course,” he kept telling me. “We have mountain (all-purpose) bikes. We are probably not allowed on the course.”

“Are you done yet?” I asked after a bit. “I want to go on the BMX course. There are no park supervisors nearby. Let’s just go and see. It’s not like they’re going to kick us out of the park. There are no signs saying we can’t go.”

Soon, we were standing at the top of a big ramp. It was a long way down, and Harrison had already done it once. Now it was my turn, and I was scared.

I mustered up my courage and let go of the brakes. Going down wasn’t as bad as I thought it would be. Then I hit the bumps and was jiggling around all over the place. Harrison was biking behind me, like he said he would in case I fell.

I rounded the first corner, and went over some table-tops, and then hit the second corner. I started low on the corner and ended really high, about two feet from the top. For a split second I was at a standstill, and I jerked my front tire to the left, and then went down. Here was the worst part. All these short little bumps where you can not control how fast you go and how much you get air. For me, I got air when I wasn’t trying to. It scared me really bad.

The third turn wasn’t bad, and then I was on the home stretch. I was heading over a bump, and didn’t see a small bump at it’s base and almost wiped out. But I was able to stay upright and on the track, and ended.

Since that first time, Harrison and I raced several times, keeping clock for each other. By the morning of the race, my fastest time was 1:01.4, or something like that. I was proud of myself.

Harrison and I got up at 7:00, hoping to volunteer. We went down to the race course and looked around for someone to ask. There was one guy screwing trophies parts together in a shed, so we asked him. He didn’t think there was a BMX race today, so we were out of luck. Fortunately, I found a box of red papers that had BMX race schedules. Sure enough, there was one scheduled for that day. Registration started at 9:30, so Harrison and I decided to come back then.

Harrison also had another little flyer that told us the rules for entering in a BMX competition. “We could make this work,” he said. “I could strip down my bike and enter!”

So that’s what we did. We took off the rack, the light, the reflectors, the water bottle holders, the fanny bag, and the kickstand.

“It’s so light,” I commented, lifting up the bike.

What ended up happening was that we talked to another man who knew more about it then the other guy did. He said that the man who scheduled all the BMX races was out of town at a parade, but would be back later that morning, and the race would start then.

“Can we enter?” Harrison asked.

We headed back and quickly stripped down my bike as well. I knew I wasn’t going to win. I knew that I would be last, but I also knew that it would be fun.

The guy who ran all the races lent full-face helmets to Harrison and I to wear. It was a bugger trying to get those things strapped, and my head was five pounds heavier afterward.

Lots of kids started coming into the park to race. A lot of them were on a race team, and they were all younger than we were. Harrison and I were put in the ‘Cruisers’ race, since we had big tires. Two other kids raced in our section.

The first time I saw the gate go down to allow the bikes to go down the ramp at the same time, I was terrified. It was like a set of teeth chomping down that I was riding over. But once I had practiced on the track a couple times with the gate, I was fine. It wasn’t as scary as it looked.

All the other racers went first, and then it was the ‘Cruisers’ turn. I was on track 4 first. And I was last. I still had not figured out who to take the second turn right, and that cost me a lot. Besides, the other kids were taking the track in about 40 seconds, and they even left Harrison behind in his 50 second run.

Our second run wasn’t much better. I was on track 6, and it didn’t make me run any faster. I was still last.

And track 8 was worse. I was still last.

But I had fun racing. I was always fourth, but never fifth.

Later that day, about half an hour before the sun went down, Harrison and I ran the track again. It was much cooler, and I finished the track in 58.9 seconds. Harrison just hit his best so far this morning, at 48.3, or somewheres around there. And neither of us have wiped out. 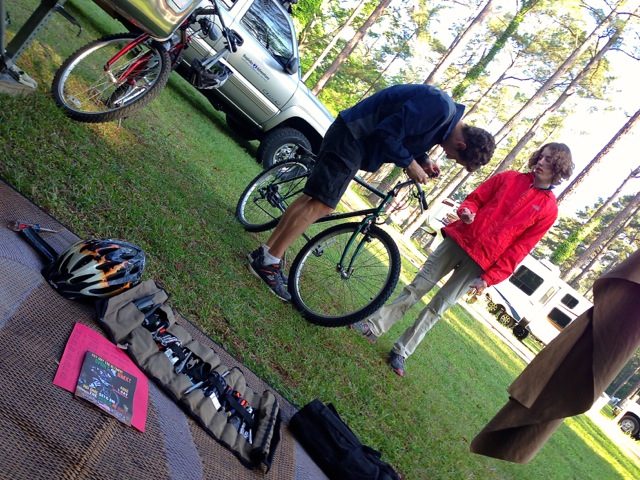 Stripping down the bikes 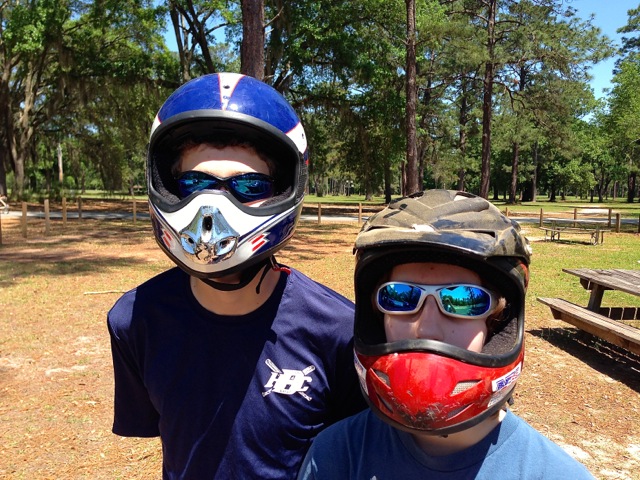 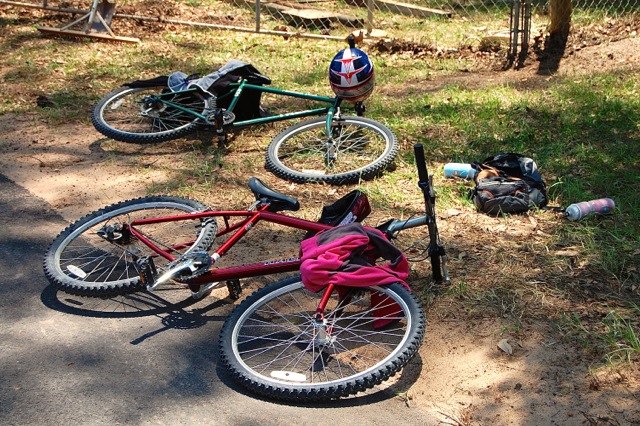 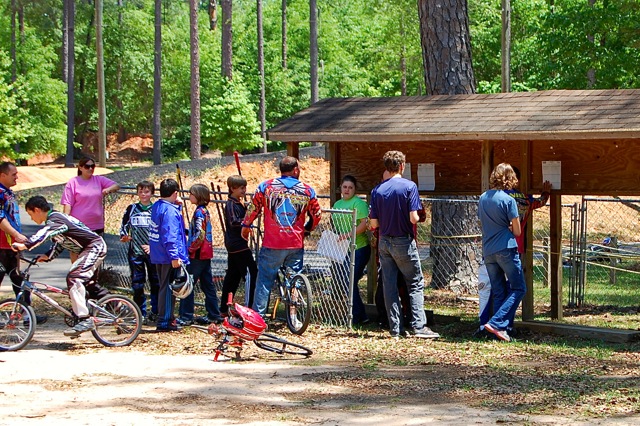 Looking at what track we're on and when we race 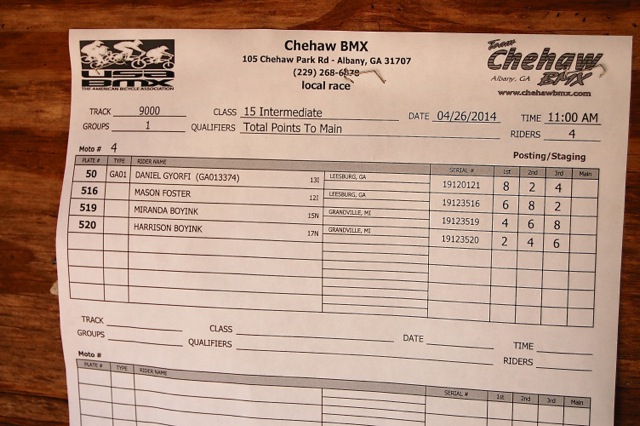 Looking at what we were looking at 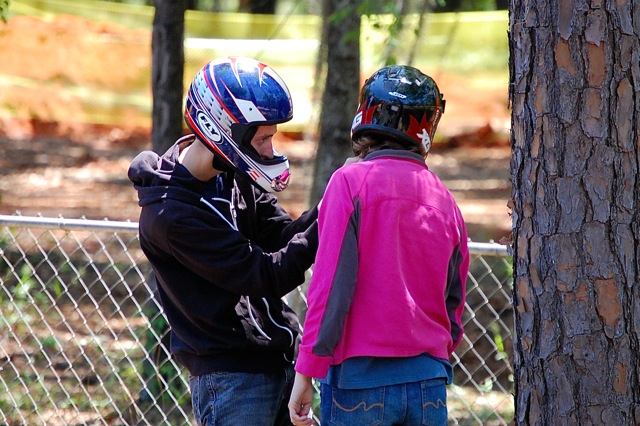 Figuring out how to fasten the masks 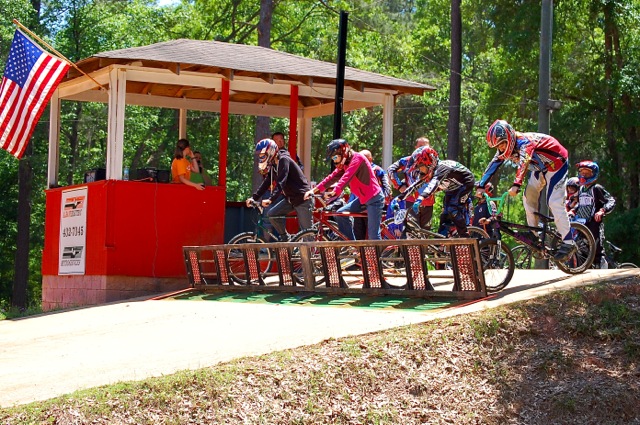 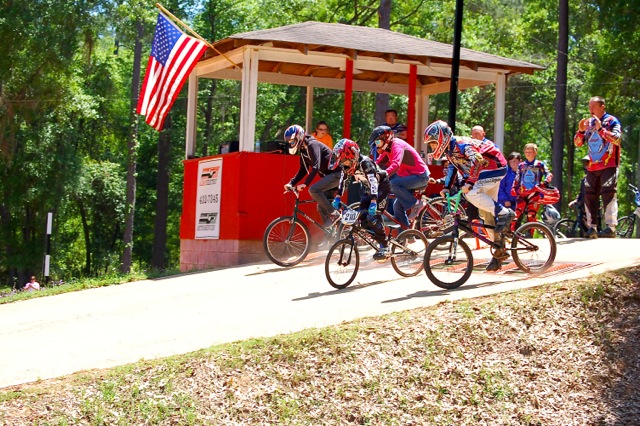 Already in the back ;p

Coming up on the first bump 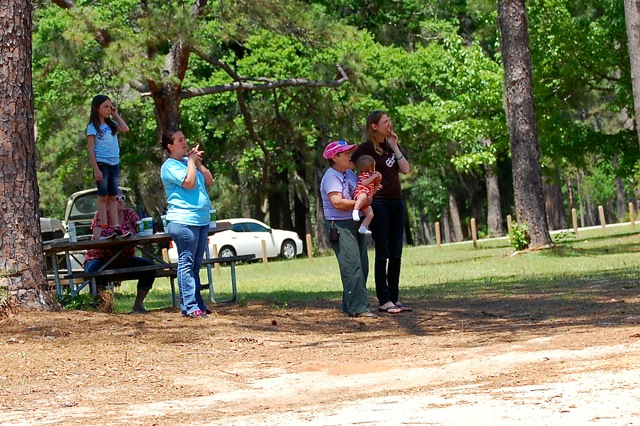 Cheering on the racers 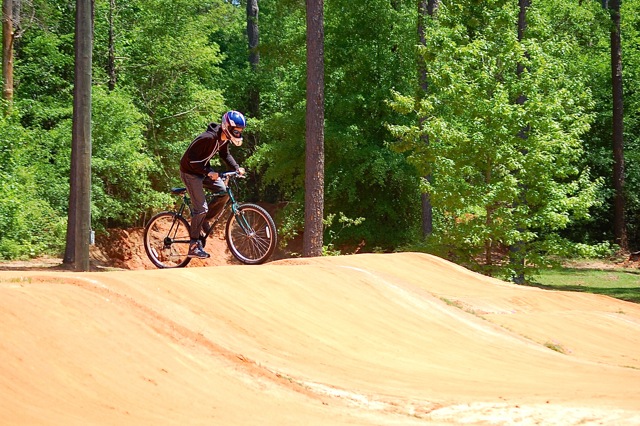 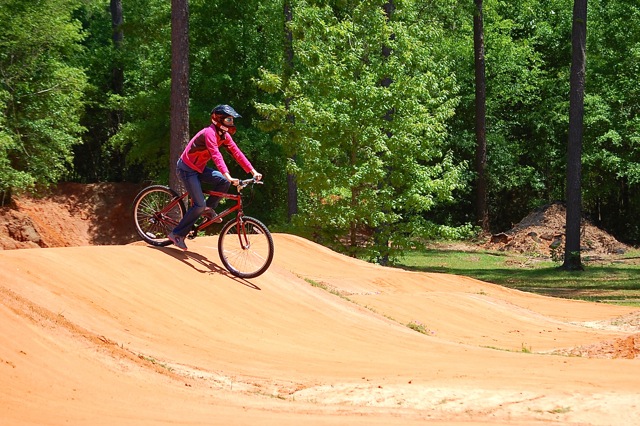 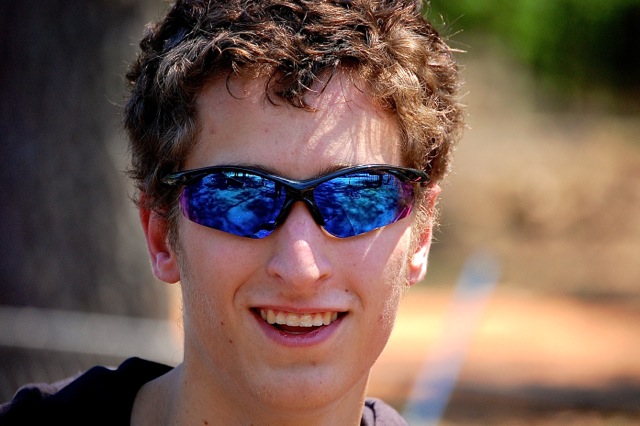 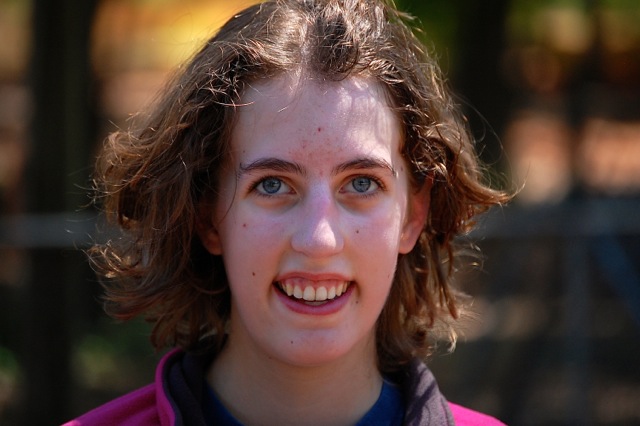