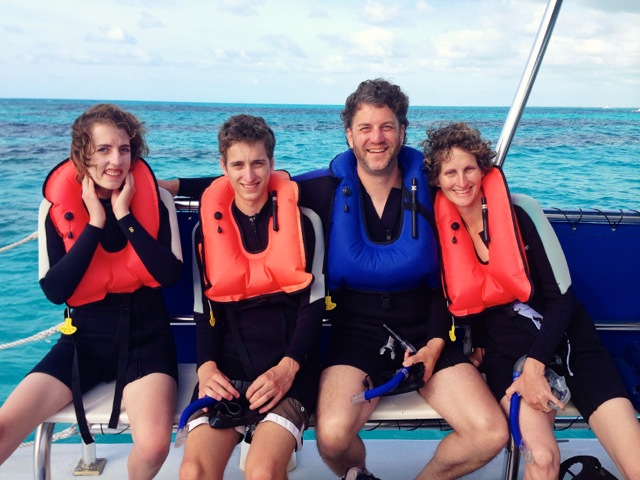 It was my third time in a wetsuit. First had been on the other side of the country, surfing. The second had been in Florida as well, in freshwater. Now I was getting in a wetsuit to go swim in saltwater, or the Atlantic Ocean, to be exact.

Wetsuits have always been a problem. These weren’t so bad, as they didn’t have full leg coverings, but only shorts. But the arms were still just as hard as they were before. And the flippers. Last time I wore flippers, I was probably about nine, possibly younger. Flippers are also hard to get on.

So, what I mean to say is that by the time I had everything on, my body felt like it had been poked, prodded, and pushed in every possible direction and way, especially as I had to go down one size in flippers and in a wetsuit.

The boat ride to where we were going to snorkel was very fun. The waves were pretty big, and I felt like I was cantering again. I straddled the bench I sat on, held onto imaginary reins just like Nancy had shown me numerous times, sat up straight and tall ‘like the Queen of England’ as my riding teacher always said, closed my eyes, and felt the rhythm. It was a very pleasing experience, since I had not been on a horse for two months. It was also very quiet, since my earplugs cut all noise down (except my own voice, which it amplified by 22 decibels).

The water wasn’t too cold. It was a little cool, maybe two or three degrees warmer to be perfect, but I slipped in, thankful for my wetsuit. I tagged along behind Harrison, since the driver of the boat had instructed that all children under fourteen should be accompanied by an adult. I know I’m fifteen, and Harrison’s only seventeen, but I felt like I would be better off with someone else to be partners with anyway.

I had a little trouble getting my face in the water at first. I had a little freakish moment, since it was only my second time using a snorkel, but I got the hang of it again, and flippered out.

At first, all I saw were lumps in the water covered by grayish stuff, or brownish stuff. Harrison and I passed over an underwater meadow, which was interesting. I did not see any life in it, however, so we paddled on.

Over the course of the next many enjoyable minutes, I feasted my eyes on an array of beautifully colored fish. I saw barracudas, stoplight parrotfish, queen parrotfish, bigeye yellow snappers, royal grammas, moorish idols, what I think were puffer fish, and several other kinds of fish that were roaming around the ocean floor. I loved just lying facedown in the water and watching the antics of the fish as the waves aggressively broke over my head.

After a while in, I floated back to the boat, having become very tired, and stayed in the boat for the rest of the time, marveling over all the things I had seen.

It was a very enjoyable experience.

3 Comments → Miranda’s Take on Snorkeling in the Ocean