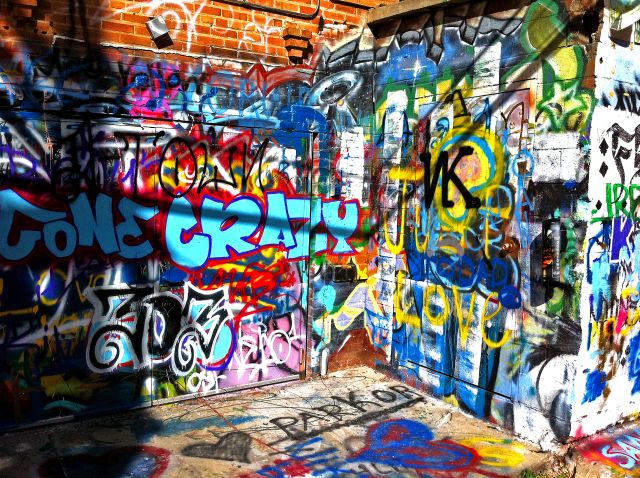 Before leaving on our trip last year, we read several books and watched a few movies related to traveling. One of the fun DVDs we watched was put out by Roadside America and showed several interesting places and things that can be found in our country.

During our travels, we’ve stopped at some of the attractions listed at RoadsideAmerica.com—some purposely (Tinkertown and Standin’ on the Corner) and some just by chance (EE meetup location). When we entered the state of South Dakota, I checked the Roadside America website and found several items/locations that were near our planned route through the state.

Mount Rushmore, Keystone SD
This attraction was on our family’s must-see list and was our reason for coming to the Black Hills of South Dakota.

Chief Crazy Horse Memorial, Crazy Horse SD
I had no desire to pay to enter the gates of this partially finished memorial, but I didn’t mind that we saw the carving from a distance while driving home from our day at Custer State Park.

Big President Heads, Hermosa SD
Our original campground “base” for the Black Hills was in Hermosa. On our drive in we saw three larges busts of Presidents Reagan, George Bush I, and JFK in front of a business. I didn’t know at the time that these giant heads are listed on Roadside America.

America’s Street Corner Presidents, Rapid City SD
I read about Rapid City’s president statues in a brochure given to us while we were in Washington. I thought it sounded kinda fun and so did the kids. We scheduled a day to drive into town and see the statues. It was an incredibly windy day and quite cool, but we walked around town checking out the statues. When we were about 2/3 through, we stopped at the information/visitors office and the kids were challenged with a visual presidential scavenger hunt. We had to do a bit of back tracking, but we saw all 42 presidents, the kids completed their scavenger hunt and they were both awarded with a presidential soft drink.

Art Alley, Rapid City SD
While we were walking through Rapid City, looking for the Presidents, we took a “short cut” through this alley (it was mostly clean art).

Wall Drug Store, Wall SD
We made sure to enjoy 5 cent cups of coffee and free ice water.

Wall Drug Dinosaur, Wall SD
Miranda eyed this attraction on the day we drove into the Badlands.

Giant Concrete Prairie Dog, Cactus Flats SD
As we were heading back home from our Badlands experience, we drove by this weather-worn concrete creature. I asked the family what it was supposed to be - they replied in unison, “A prairie dog.”

Big Bison and Big Steer, Mitchell SD
Our route to the Corn Palace took us right by these burly fiberglass giants.

Jackalope, Mitchel, SD
On our same drive to the Corn Palace we saw this poor antler-less jackalope (basically a big rabbit). We didn’t bother stopping for a photo because Mike captured me sitting on a jackalope back in Wall.

Corn Palace, Mitchell SD
This attraction was our main reason for stopping in Mitchell. The palace itself was quite underwhelming! We were pleased that more was going on there to hold our attention. Inside the Corn Palace we caught the final round of the National Pedal Pull. Outside we walked several blocks and enjoyed the OutKasts Car Show.

Rest Stop Tiny Church, White Lake SD
Although we didn’t stop to worship here, we did take note of the tiny chapel.

Skeleton Man Walking Skeleton Dinosaur, Murdo SD
We looked so hard for this one, but were skunked. However, several miles down the road in Montrose, SD, we had the quick pleasure of spying the Porter Sculpture Park (hard to take it all in at 55+ mph on the interstate). 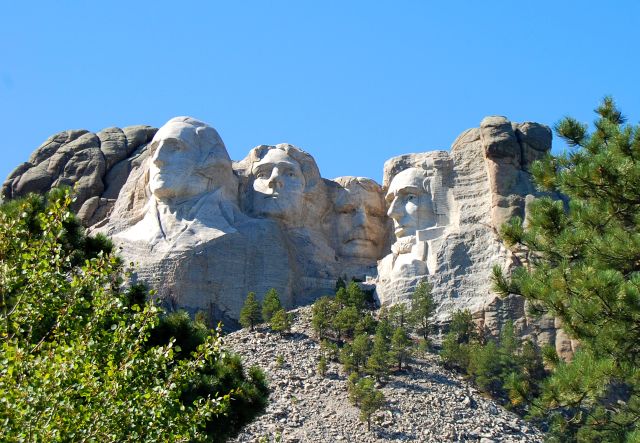 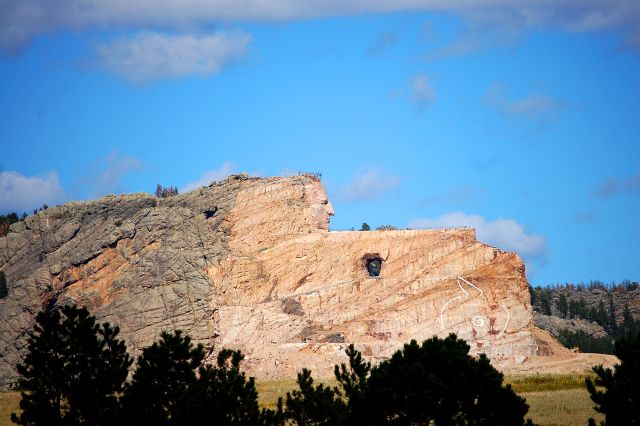 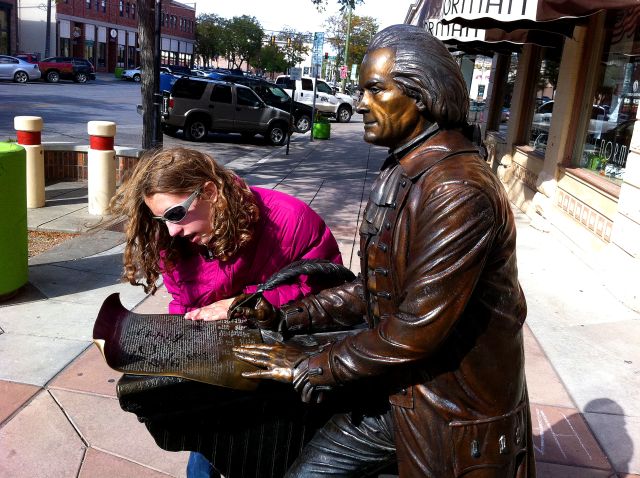 NOT learning history while looking for Presidents in Rapid City 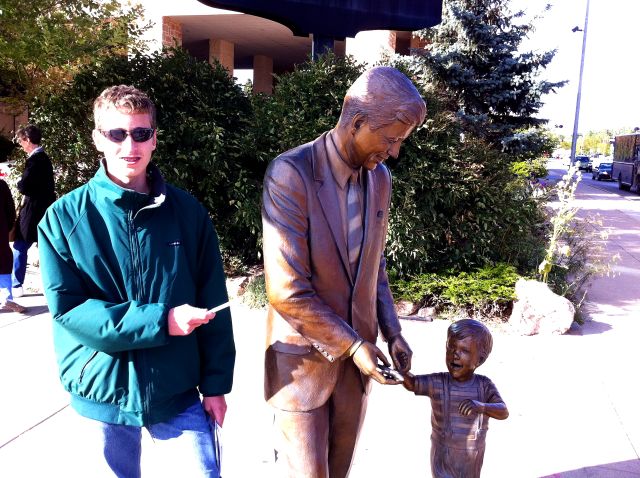 Data with his favorite president - JFK 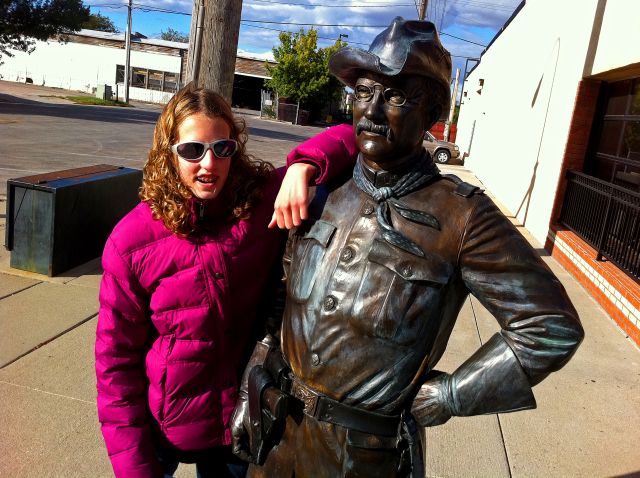 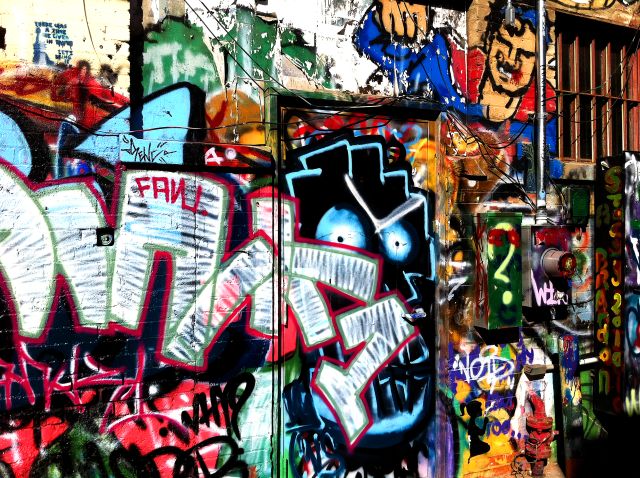 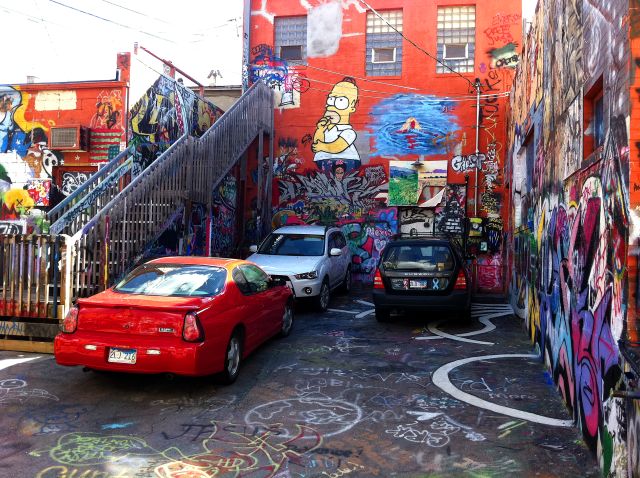 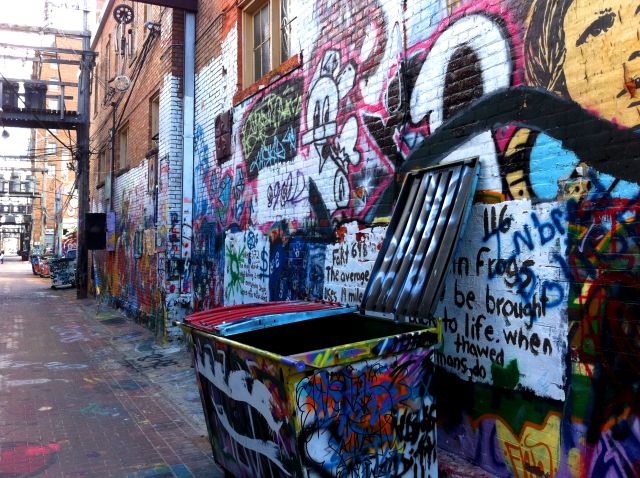 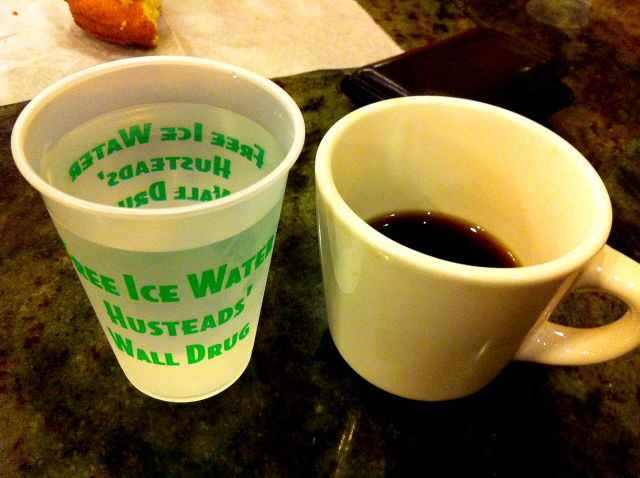 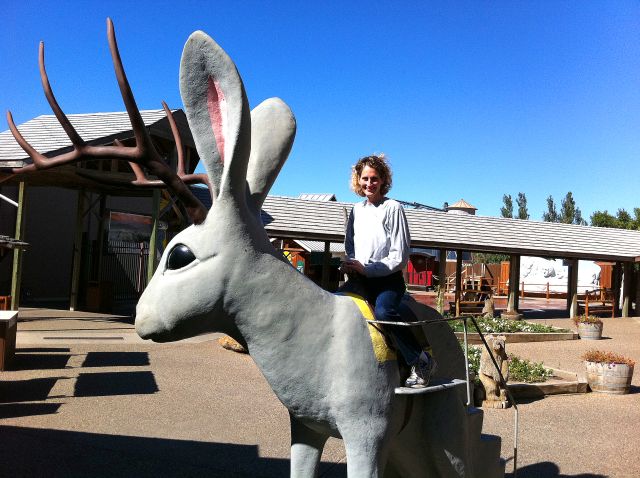 MsBoyink on a Jackalope in Wall 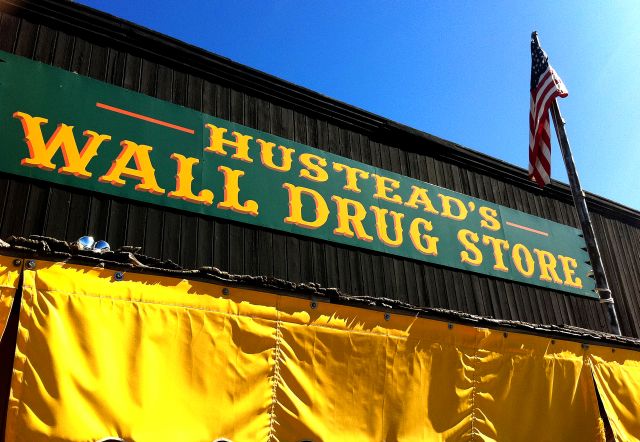 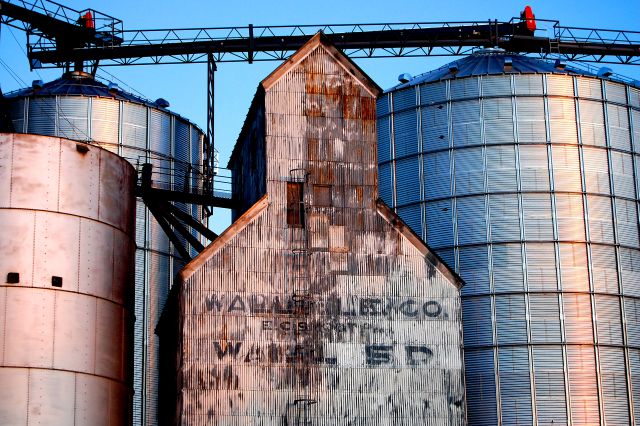 Grain silos next to our campground in Wall 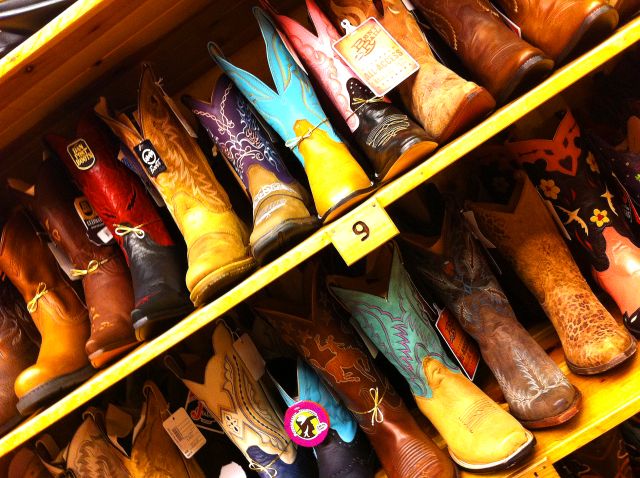 Cowboy boots at a store in Wall Drug 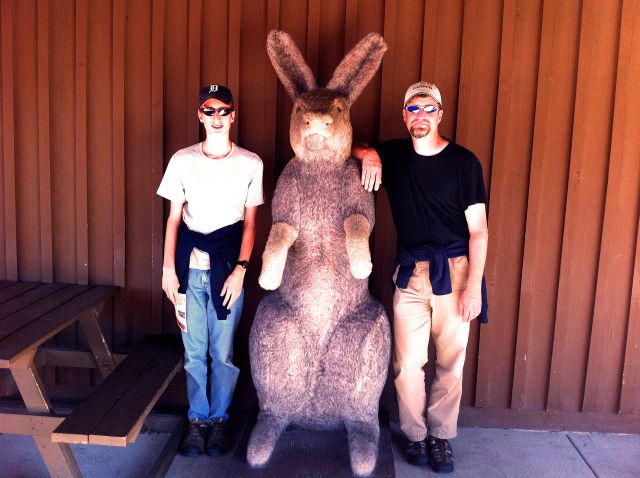 Boys standing next to the advertised 6 ft rabbit 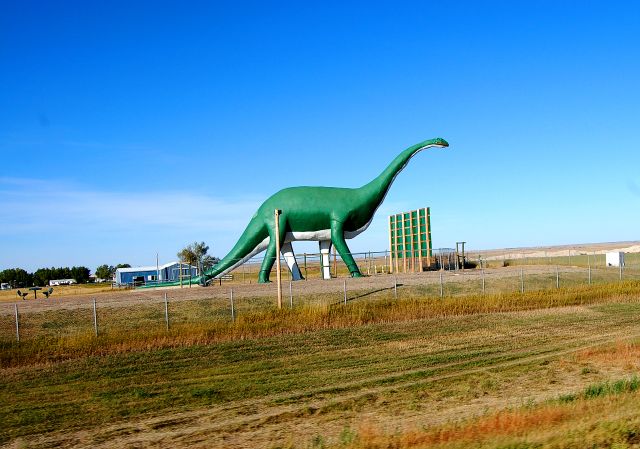 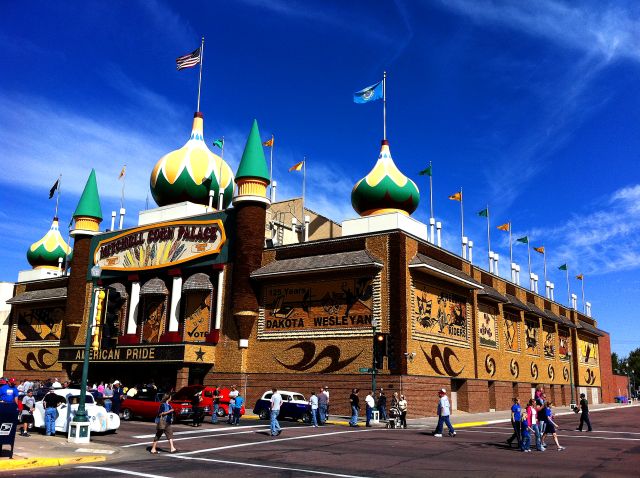 The Corn Palace in Mitchell 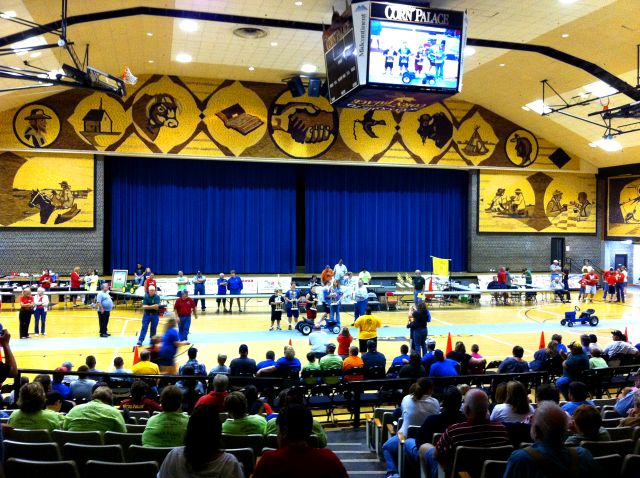 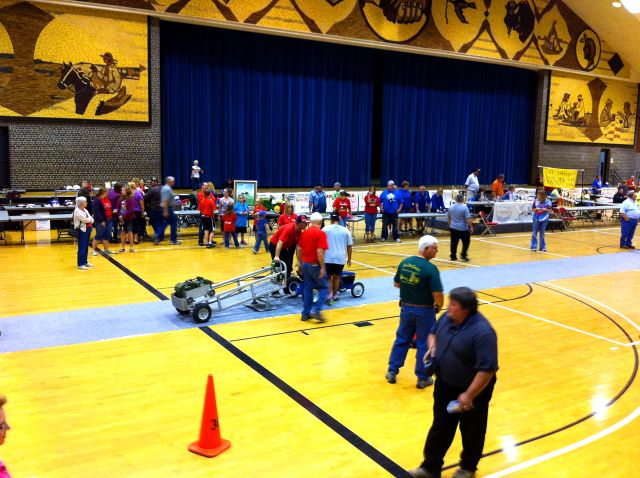 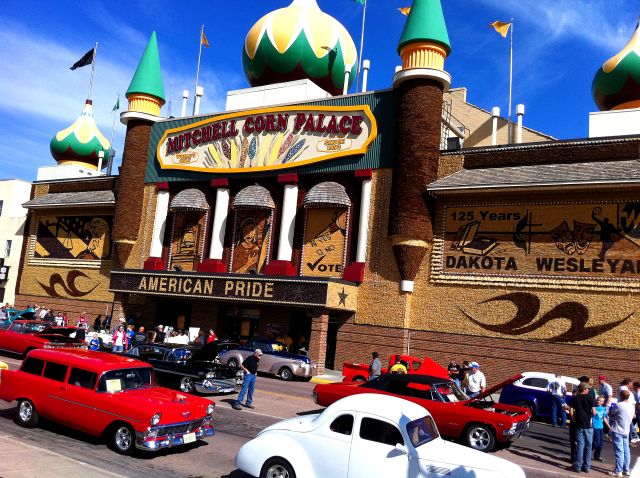 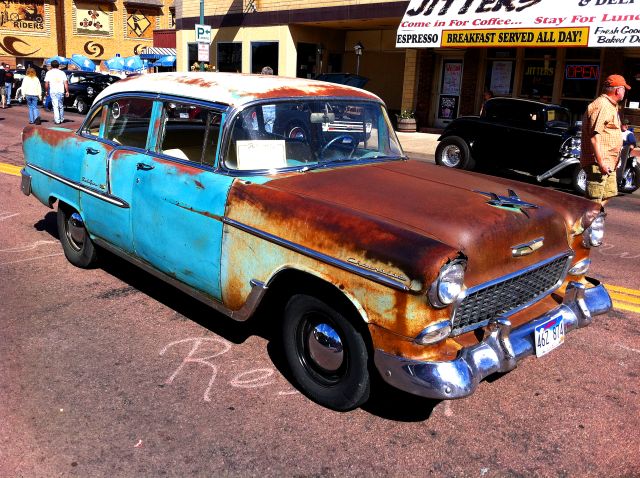 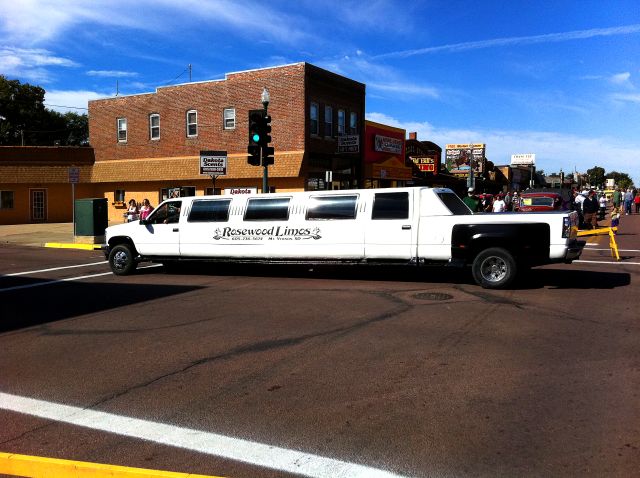