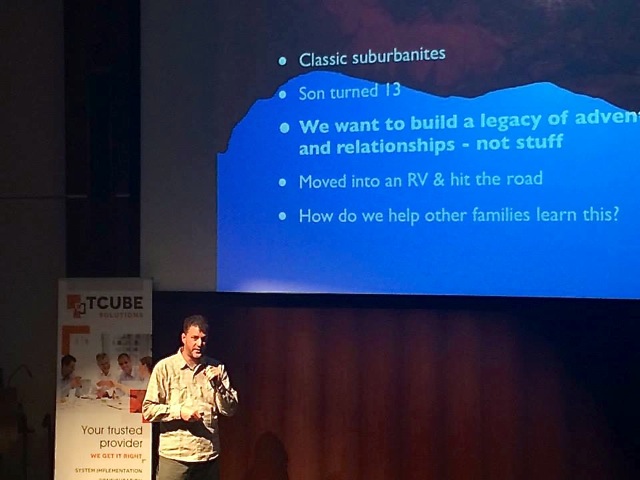 This was my 3rd Startup Weekend, and it appears that I require a full two years to recover from the experience as my first one was in 2010, and the second in 2012.

I’d love to say we did a bunch of research around the hottest tech scenes in the country, intersected that with where there were Startup Weekends planned, and matched our travels to be at the best one possible.

In reality, the Columbia event fit the suit - we were in Virginia, making our way towards Florida, and I thought to check the Startup Weekend website to see what was going on. The timing and location of the Columbia event dovetailed into our rough travel plans so after checking with the kids to see if they were interested in going I booked the tickets.

I had no idea to pitch when I booked the tickets. My thought was that I would - like in years past - jump on someone else’s team as Information Architect / User Experience Designer / Web Developer.

I told the kids early on that I expected them to be on different teams from myself and from each other. I knew it would be a ‘safe’ environment for them to be on their own and have to make connections, get to know people, and figure out their place within a working team structure. While neither of them has mad programming skills I knew there would be enough non-technical work that they would be able to help with.

Between booking the tickets and getting to the event I had a wild hair of an idea - what if we came up with a game to complement our Ditching Suburbia book project? The classic American board games like Life and Monopoly were created during completely different eras of our society. They celebrate ideas and actions that are no longer seen as responsible or sustainable. To win you have to get ‘all the things’, bankrupt your opponents and spend a bunch of money. What if we created a game that thought differently? Maybe you start with ‘all the things’ and have to get rid of them to win?

I decided to pitch it. Worst case the pitch would suffice as a mass introduction of ourselves to the room and jump-starting any conversations or connections that the weekend might offer. Best case is we’d spend a weekend in an different head space doing something we had never done - making a board game.  The idea of something physical & offline was attractive.

I pitched somewhere in the middle of 33 pitches getting more nervous than I wanted to. It’s funny - I’ve spoken publicly a bit, teach classes where I speak all day in front of people, but there was something about being in a completely new place, with all new people, in an auditorium style room with bright lights and audio reinforcement that brought the nerves on.

Next was the voting & team building process. I garnered enough votes to make it through to the next phase, but when it came time for people to join the team I started to feel like things were slipping a bit. A couple of people who I talked to who showed great enthusiasm about the idea didn’t show up to join the team. I was on the verge of killing it and joining another team but managed to get two other folks in addition to MsBoyink. They were excited enough to move forward so we did..gaining another person later on.

It’s really different being the ‘idea person’ of a Startup Weekend. It was almost a completely different event from the others I attended. I promptly forgot lessons I had learned previously and got way too mired down in the details of how the game would work, not spending enough time on validating the idea and working on the business side.

I think I overcompensated in some ways - I’m not used to working with larger teams so wanted to make sure others were able to buy into the project. I wanted everyone to be happy. I didn’t want to step on toes. But there came a point late Saturday night where I was about ready to again throw in the towel as we were struggling as a room full of individual contributors, not working as team, and I didn’t seem to have the leadership skills necessary to change that.

Then around 10PM a certain idea about a game rule got buy-in from the others and suddenly we were a team. It felt like we could move forward. Anxious to end the day on a good note I documented where we were at and called it a night.

I’m not sure if it was our room location or what, but although we heard there were 20 coaches/mentors at the event we were only visited by a handful. Of those who did visit us, not all were helpful. We were mired down in the details of how the game would work and really needed to be pulled out of that and re-focused on the final pitch. Some mentors just got us deeper into the game-mechanics muck, causing us to rehash the same conversations we had already had.

Other mentors were helpful - joining our team for our foray outside to find families to interview and talk with in hopes of validating our idea.

Mid-morning Sunday we finally got our most valuable coaching and within 45 minutes had our final pitch roughed in. The final pitch is 5 minutes long and the details/demo of what you built (the game in our case) only get a minute or so of that.

During this time the team had also worked up a paper game board, using some 3D print piece samples from the room next door as game pieces.  We coerced another Startup Weekend participant and his son to act as models while we grabbed some photos.

I practiced the pitch and refined the pitch deck a couple of times, somewhere in there ate some pizza, and all too soon it was time to head to the auditorium for the final pitches.

We were pitch 11 out of 15 - not a great spot but there’s nothing to do about it. I listened to most of the pitches before me but then bailed to go through ours again, still finding places where I could improve the flow.

I mostly said what I intended to. I got a bit verklempt when talking about my son turning 13 being the reason we started traveling (pretty sure most people thought it was nerves but my family picked up on it). I managed to get a few laughs from the crowd. I again got more nervous than I wanted to (need to do this more often I guess).

The judge’s questions were mostly what we expected. The big one is/was how you go about selling a game designed to teach people to not buy things? Answer - there are ways people get games besides buying them for themselves, and if you are thinking that way maybe you are past needing the message of the game. Besides, if a $40 game convinced your kids that they don’t need a smartphone that will cost you $1500 then that’s money well spent.

Another question - why not an iOS game? Answer: because the families we have talked to who made drastic lifestyle changes like we have share a common goal of more face to face family time. Maybe there is an iOS game down the road, but it wouldn’t be our first focus.

Another - what about people who can’t take as drastic of action as you have, what will the game have for them? Answer - we want to distill down our drastic experience and give people ways to implement it on a smaller scale. For example, choosing to not install an in-ground pool knowing you will never again leave your house because the pool needs maintenance.

There was another question or two that I can’t remember. Then we were done and it was time to relax and just let the chips fall where they may.

In the end we didn’t place in the top 3 - but there were some really great ideas that had done very well with both their product and their final pitch. I’m humbled by how well some of these folks present - I think the best presenters were the college-aged folks. And who can compete with a kid who both turned 13 on pitch day, can program an app, and make jokes in front of a crowd? ;)

And, you know, the Boyink kids were on the winning team so we didn’t do bad as a family.

The weekend was no loss, however. We did get a lot of great comments on our game and the team members still want to move forward with it. We got some leads for contacts at existing game companies. We are able to enter the idea in a higher-level “battle” that has themed tracks that we may resonate with better. There were content themes that will show up in the book.

Even then - with the advent of print on demand board game companies it may be an idea we can bootstrap ourselves with no outside financing needed.

Here’s the video I had to put together within 48 hours in order to qualify for the Global Startup Battle:

Thanks to everyone who was involved in the Startup Weekend event in Columbia, SC. We had a great time - definitely a highlight of our travels as a family. Stay tuned here and at Ditching Suburbia for updates on where our travels take us and where the game idea goes.

Some photos borrowed from other attendees…we’ll give them back soon. 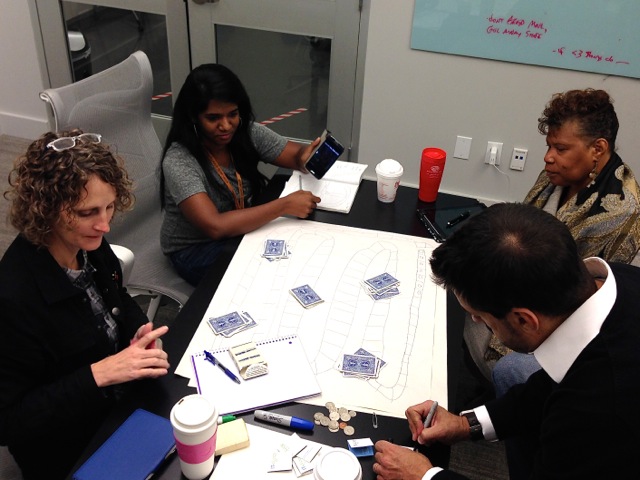 Our team works on the game 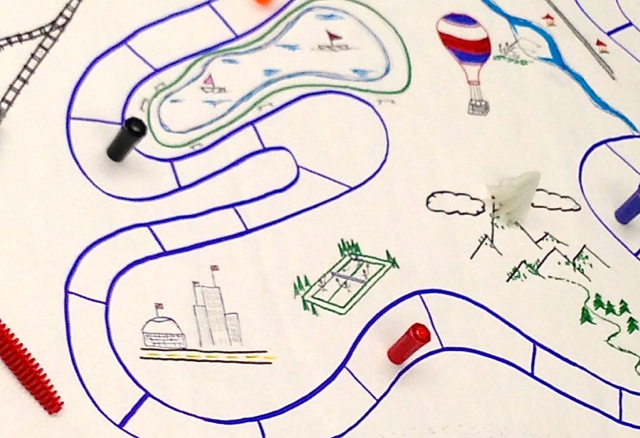 Some of the game detail 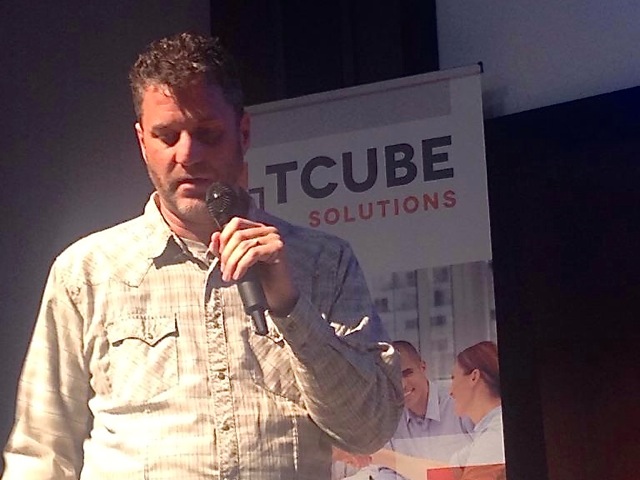 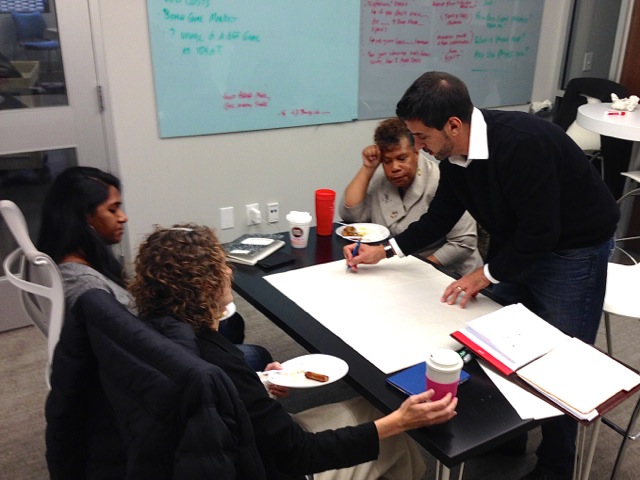 Our team working on the game