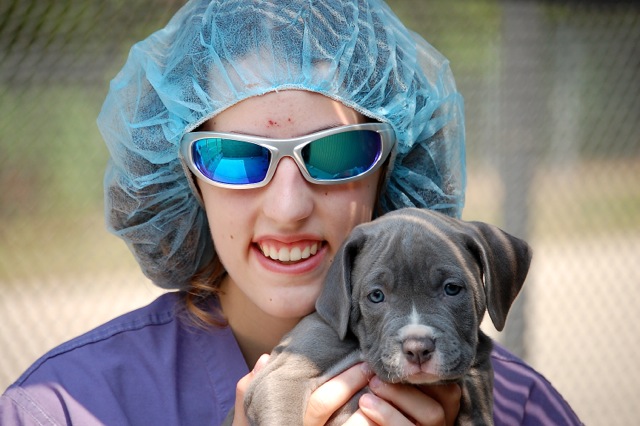 Playing with Puppies (this one's Liberty)

As soon as Harrison got a job in Fremont, I decided I wanted to get a job too. I was 15 then, and not eligible for paid work. I found a pet shelter in Fremont, Bellwether Harbor, and filled out their volunteer application and went through the orientation. Orientation brought me through the whole shelter, and I didn’t think I would ever be able to learn where everything was. As it turned out, half of the shelter I had no need to go in, so I have the other half throughly memorized.

My first day of volunteering, a surprise litter of kittens were born. I have enjoyed watching the kittens grow up every week I work. They are almost as big as adults now.

My volunteering days are my favorite days of the week. The last couple times I have been able to bike, since the road work is done. Usually I’ll bike there, enter in the front of the kennels, and sign in in the volunteer room. Then I’ll grab Jam’s harness and leash,  let her into the backside, open her kennel, and spend a good five minutes trying to get her harness on right while she goes berserk knowing she gets to go outside. When we get outside, I’ll let her walk until we reach a doggy bag disposal. I’ll grab several, stuff them into my jeans pocket, and then run with her to the play yard. Jam is the only dog I run with, because she knows to not run directly in front of me. In the play yard, I let her in, take off her leash, and open the toy bin. I always get the water bowl filled first - it’s my rule. Water first, toys second. After playing with Jam the first few weeks, I learned to always keep two thick rubbers balls in the toy bin. Jam can easily bite through tennis balls (she’s a pit bull), and she hasn’t learned why we say ‘Give’ yet. So I have to keep rotating the rubber balls.

After a while, when I notice she’s loping more than running, I tell her to drink, which she’s very good at obeying, and then I snap her leash back on to walk her back.

Next, I usually go out to the main room, where people come when they think about adopting. This is where we keep our kittens, and I like holding them and fawning over them. When I’m done petting my favorite kittens, I’ll go back to quarantine and play with puppies. Now, all the puppies are gone. So I’ll just go back and get Pearl, my favorite cat.

I first met Pearl in the volunteer room. Sometimes staff or volunteers will put cats in there as a chance for them to move around a bit. When I first saw Pearl, I immediately noticed she was missing two limbs. Her front right leg, and her tail. As I leaned up against the counter, she pushed off and put her left leg on the right side of my neck, and her head on the other side. She then kind of jumped up, forcing me to hold her. That began our friendship. Nearly every time now I’ll get her out of quarantine to cuddle with her.

There is also Lily, who will probably be adopted soon. She’s a cute little Peke-a-Pom (Pekingese/Pomeranian mix). She’s physically the smallest dog, and virtually the biggest. She thinks she runs the whole place. She loves playing fetch, but I always have to take a small ball with us, because her mouth is too small for the big ones. She’s very good at the ‘Give’ command.

Sometimes I’ll take out Hemlock, another of our pit bulls. He’s a strong lad, and so I have to give the ‘Heel’ command a lot.

I love the staff at Bellwether, and nearly know them all by name. I never want to stop working there. 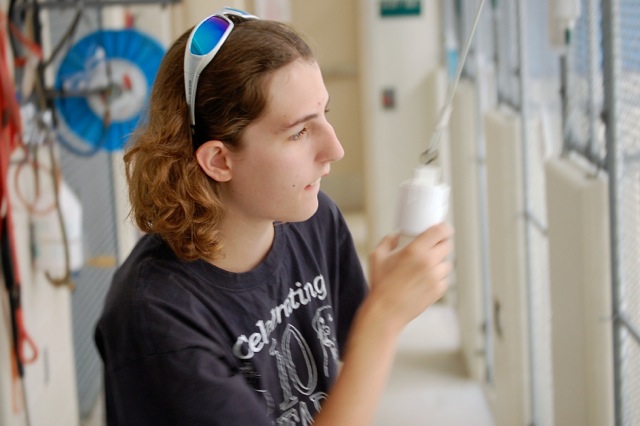 Opening up Jam's Kennel from the Backside 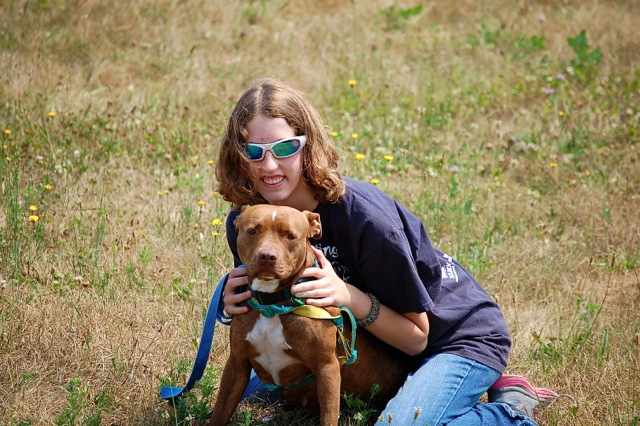 Lovin' on My Favorite Dog (Jam) 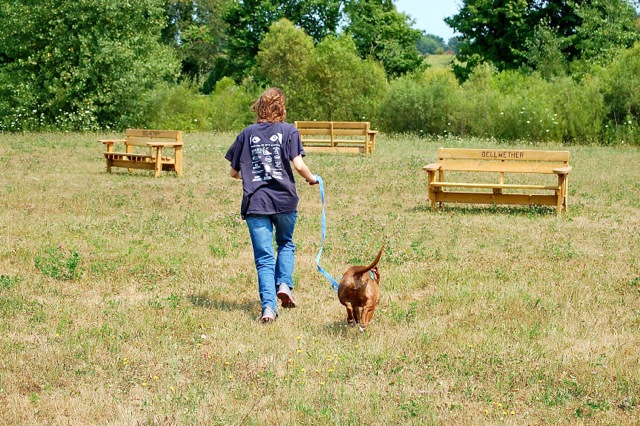 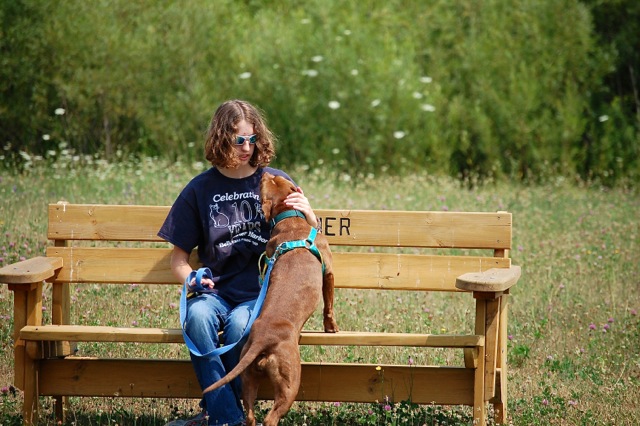 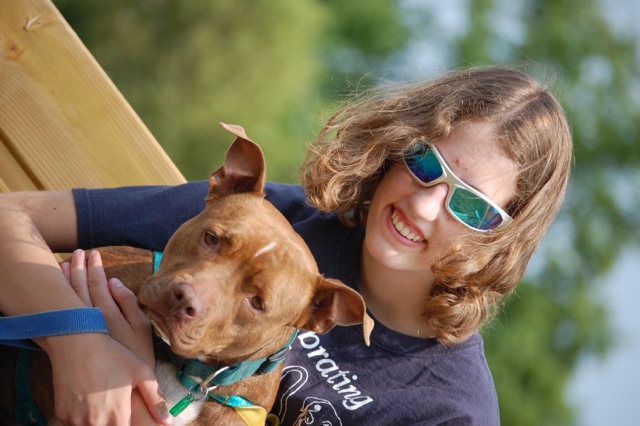 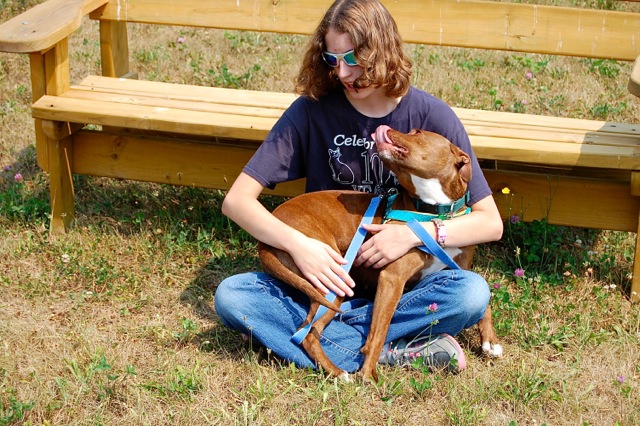 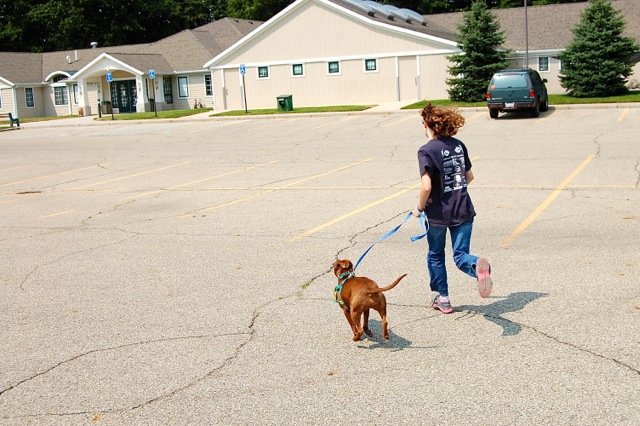 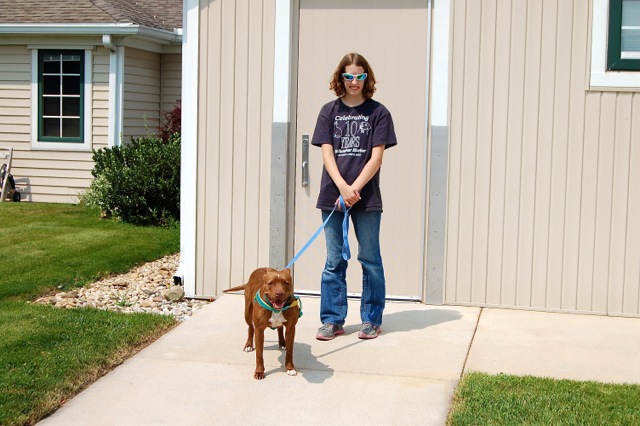 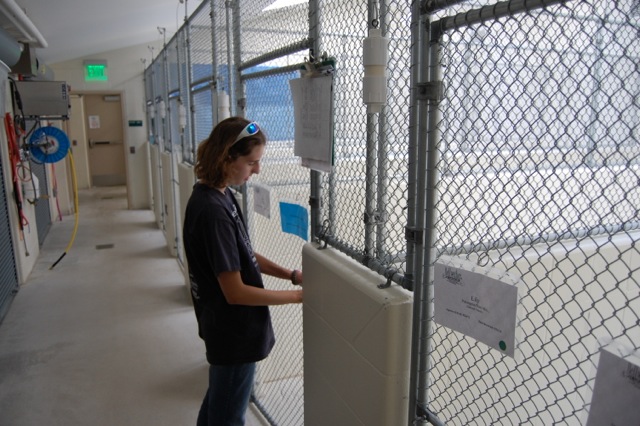 Putting her Back In