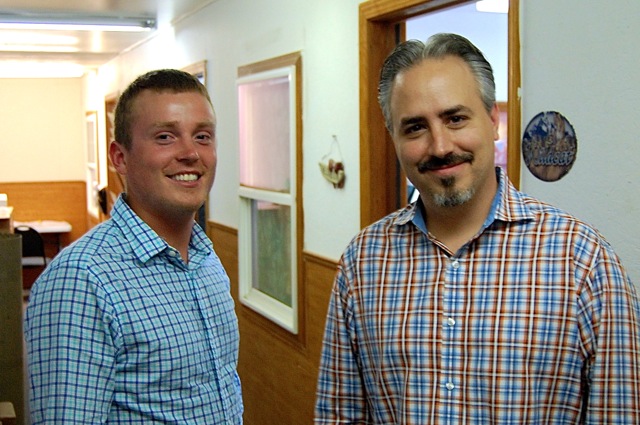 Mark and Chris - our hosts for our Wildcat RV factory tour - Thanks!

Living in West Michigan we have the good fortune to be within a couple hours of the location where the bulk of RV’s are manufactured - Elkhart, Indiana.  Once we had ordered our new home on wheels I started scheming to get us to the plant while it was on the production line.  I wanted to meet the people making it and I wanted them to meet us. Companies that make big ticket items that sell through dealerships don’t always get good facetime with end-users right at the point of production. We as RV consumers don’t often get to shake the hands of those people sweating through a long day so we can live a life of nomadic interest.

Thankfully the internet comes into play here as well.  There is a busy owner’s forum for Forest River products (one of the few actual manufacturers no matter the brand name you see on the rigs) at http://www.forestriverforums.com/forums/.  I haven’t checked any other of the sub-brands to see if this is the case there as well, but in the Wildcat line there is a factory representative who goes by “Wildcat Chris” and he’s excellent at being involved in the forum, answering questions, directing people to the right contacts for service needs, etc. I found that they were open to factory tours so contacted Chris to see if we could do that while our specific unit was in production.

Chris put me in contact with his co-worker Mark who checked the schedule and let us know when would be a good time to visit. We learned that our rig would be built over the course of 4-5 days so choose a day early on, as I wanted to be able to see the “guts” of the trailer before everything got finished and hidden.

We made the drive down and as soon as we pulled into the factory lot realized this wasn’t going to be the sanitized, enter through the gift shop and view from observation deck kind of factory tour we had experienced with Jelly Bellys and Tillamook cheese.

We dodged forklifts and supply trailers while pulling in. We found the last ‘visitor’ spot next to an overhead door with mostly-finished rigs visible and the sounds of saws, drills, hammers, and voices coming out.  Entering the modest office we met Mark who would be our guide for the tour.

After donning safety glasses and discussing photography (no real issues except for some of the further-finished units are prototypes of new floorplans which aren’t ‘public yet’) we walked out onto the production floor.

Bumping into workers carrying parts and walking between racks of components and worktables we found the back door where the trailer frames come in.  They are flipped over and the black/gray tanks are installed, then the belly pan, then the axles and wheels/tires.

From there the unit is flipped back over and put on caster dollies so that it can move sideways at points in the production process (we assume a linear building would be more efficient but they are working with what they have here).

Floors go in next, then some interior assembly starts. After anxiously looking at all the production numbers we were finally pointed to ours by the shop foreman - who gave us a smile and a big thumbs up.

It looked small!  With no walls, slides, or furniture it’s like that room you have at home that seems impossibly small but then once furnished and staged is perfectly liveable.

I managed to get some photos of how the wiring and plumbing was being routed, but we didn’t linger too long as these employees were on a mission this day. We were able to meet and thank a few of them but mostly didn’t want to slow them down. Their normal pace is “six-a-day” - completing six rigs every work day.

Moving on we saw exterior sides being moved into place, and then went upstairs to watch the roof work being done.  One of the things we liked about the Wildcat is the barrel-shaped roof - better for water runoff and also adding a few inches of interior headroom. At 6’3” I can actually stand up in the front bedroom of the unit.

I was concerned about buying another “lightweight” trailer but seeing the floor and roof of this unit am comfortable that it’s built in much sturdier fashion than our current trailer.  I’m not quite sure if there are formal guidelines around what is considered “lightweight” or “ultralight” or if those are just clever marketing terms.

We walked through the more-completed units (which I can’t post the photos of) and a completed version of ours (albeit with the outdoor kitchen). We noted the addition of a driver-side window in the front bedroom slideout and mentioned that we wouldn’t be disappointed if that design changed ended up in our unit (but we aren’t getting our hopes up..;)  It’s a bit like buying an iPhone - no matter when you jump the next version is always going to have a feature you want.

Mark was an excellent guide - having spent a number of years on the production floor himself before his current office-based role. We met his aunt installing graphics (and made her happy that we had ordered ours as a “snow-ball” - ie without graphics). Mark also mentioned a brother working around the plant somewhere.

We wrapped up in the office where we met “Wildcat Chris” who does such a great job in the owners forum.  It was clear that they listen closely to owner feedback, indeed a thread I had pitched in on this week discussing adding a trash spot in some unused cabinet space has already led to a design change for the fall models. We also talked about laundry chutes - a feature we’ll miss from our current trailer.

It was a warm muggy day - and I was reminded of my time in the boat production world and what it meant to do a physically demanding job in such circumstances.  Our hat is off to all the busy hardworking Wildcat employees - thanks for your work! 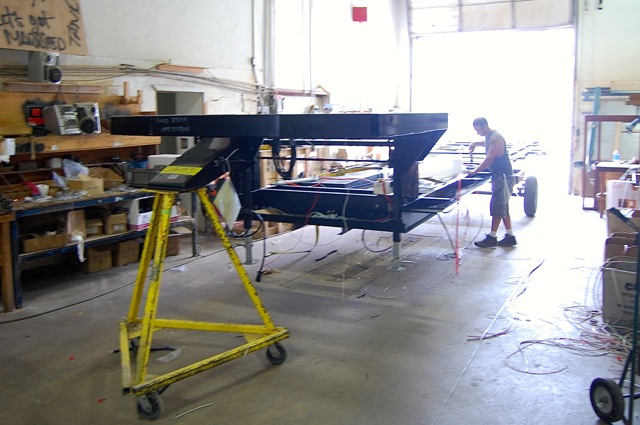 Frames come in from an external supplier. 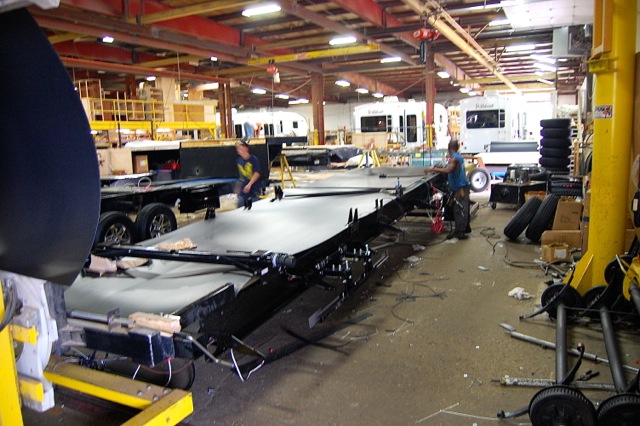 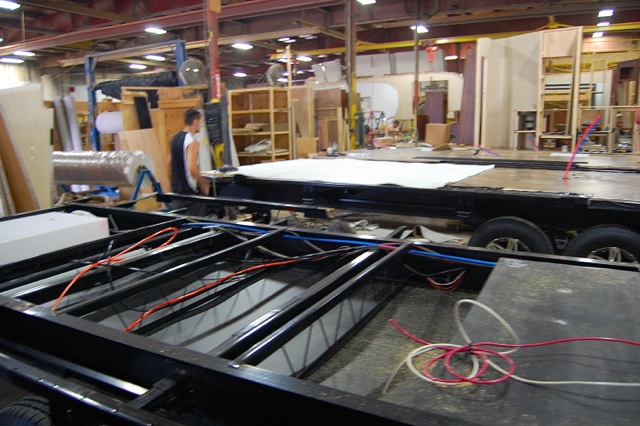 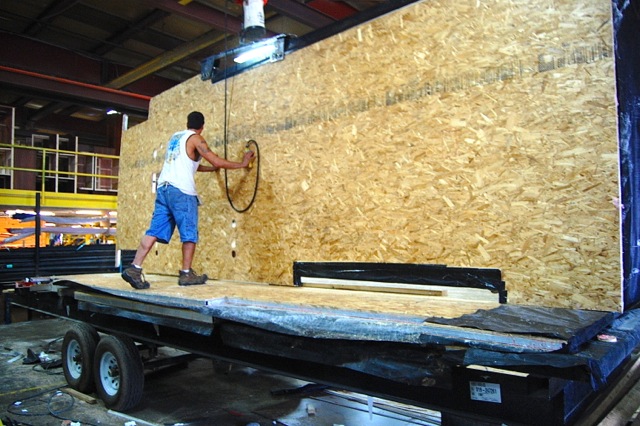 Floors are two inches thick, framed with aluminum and sandwiched with particle board. 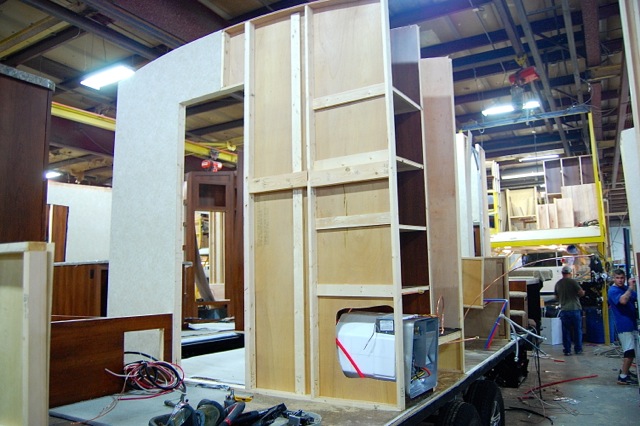 Our unit with some interior construction done. 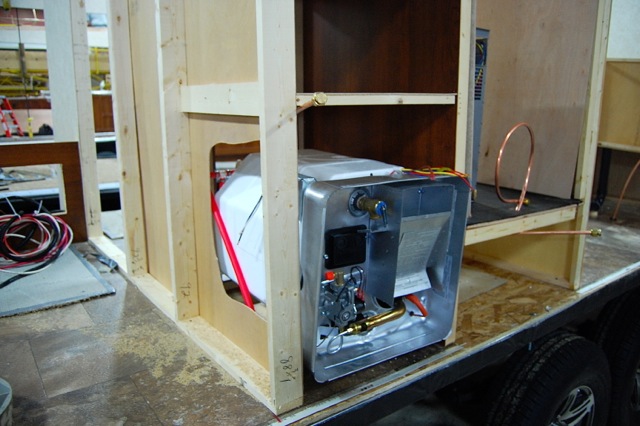 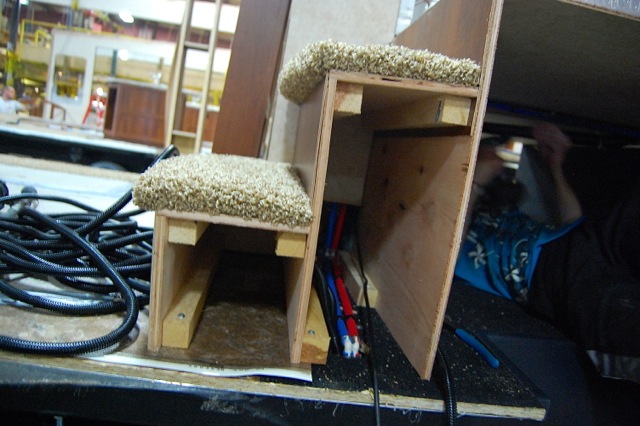 Steps - I've made shoe storage here in our current rig and could do so here again. 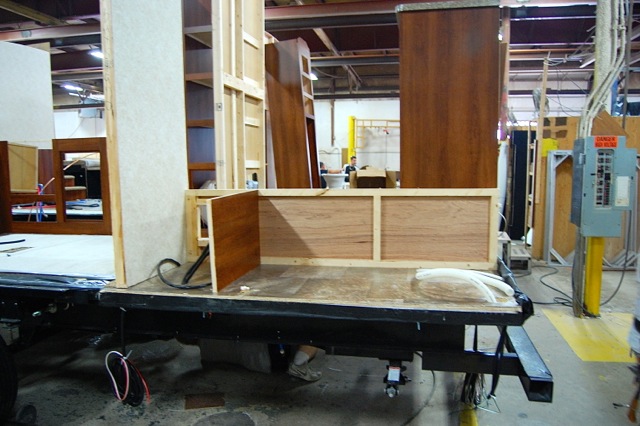 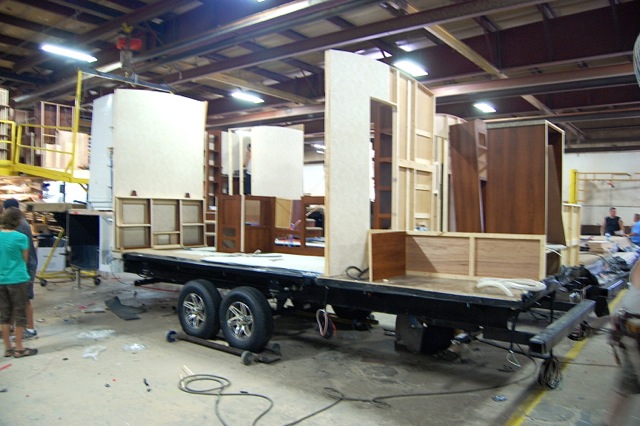 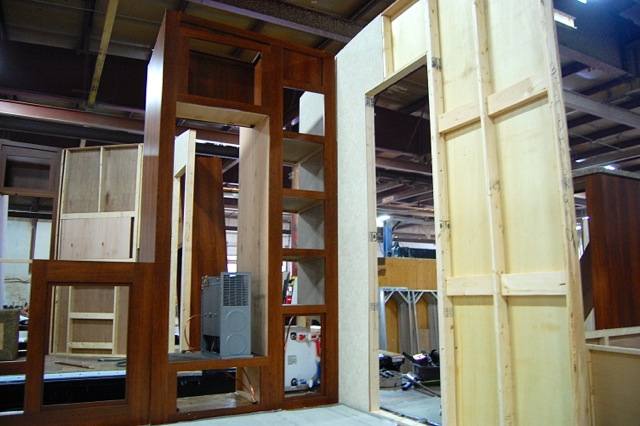 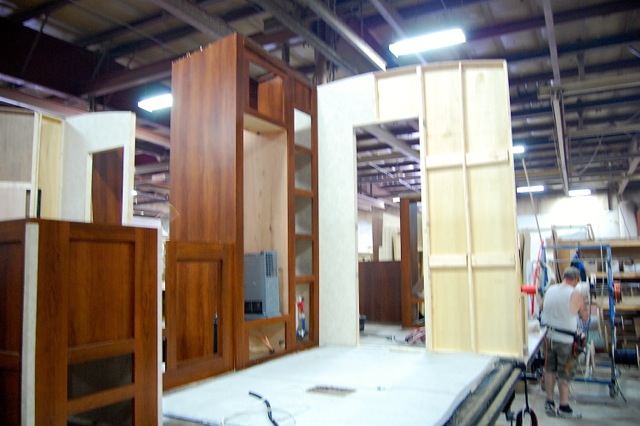 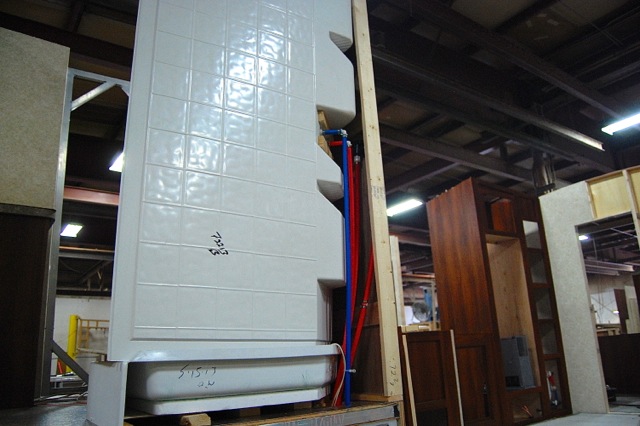 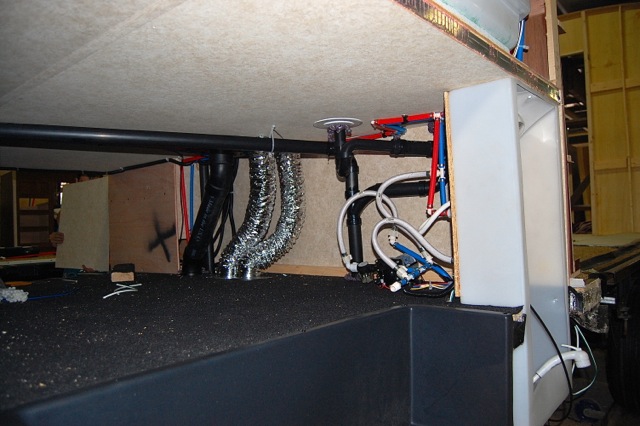 Water pump in the belly. 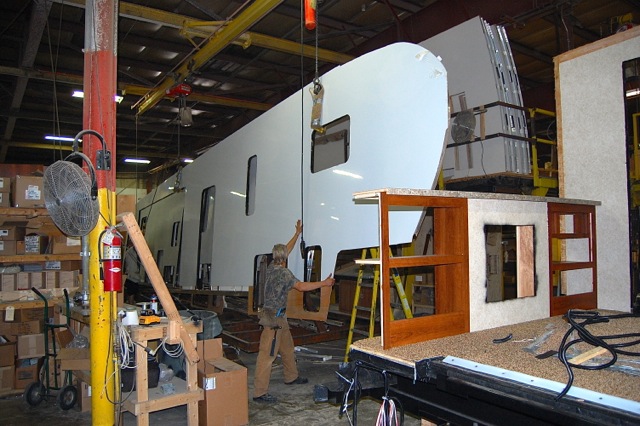 Sides being handled. Didn't see ours. 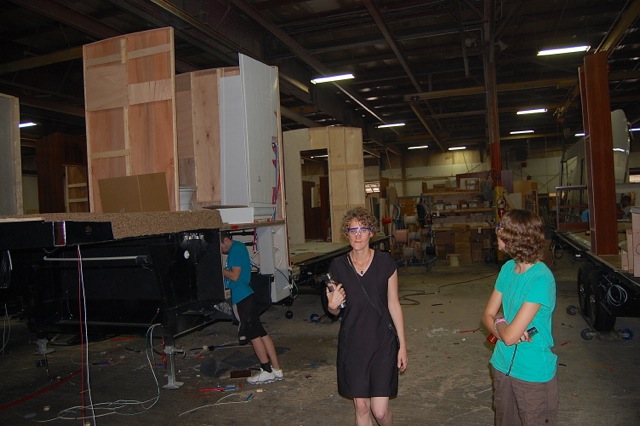 Our rig in the background. 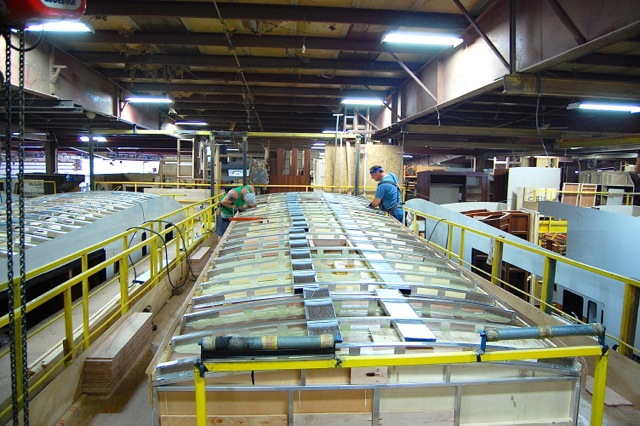 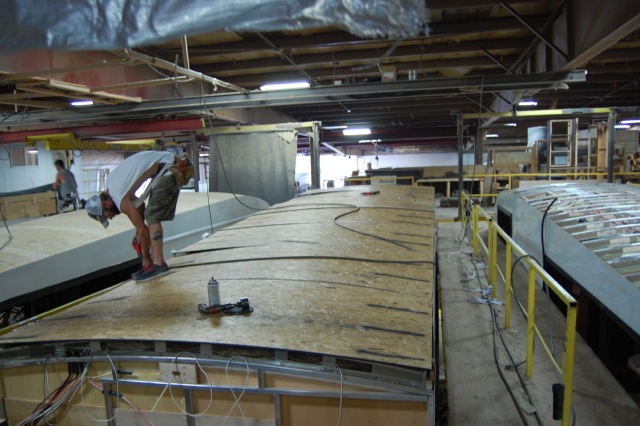 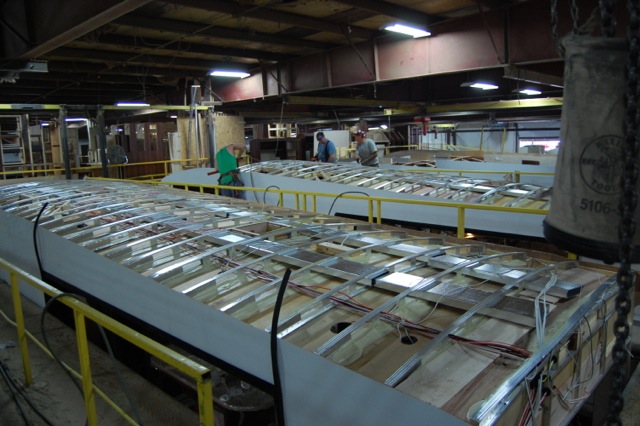 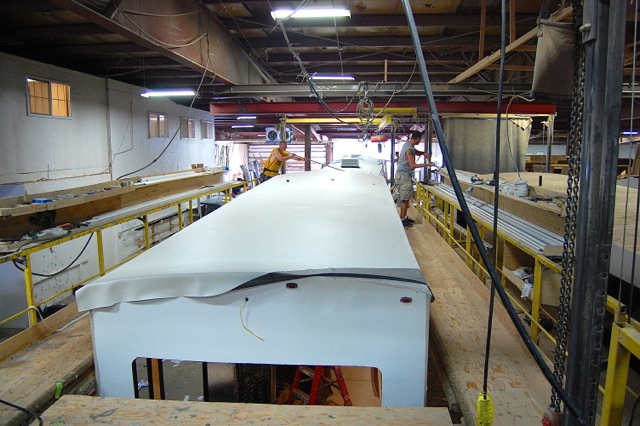 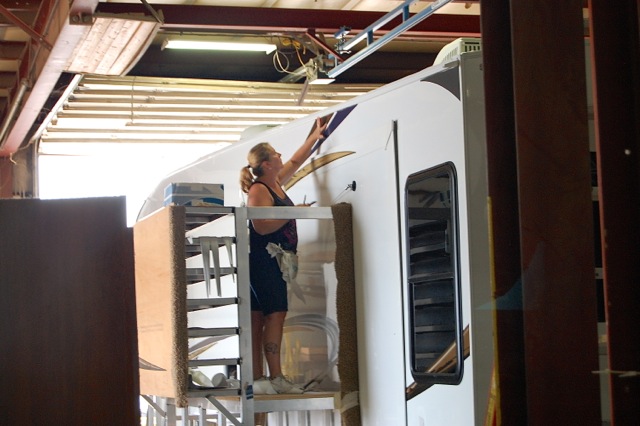