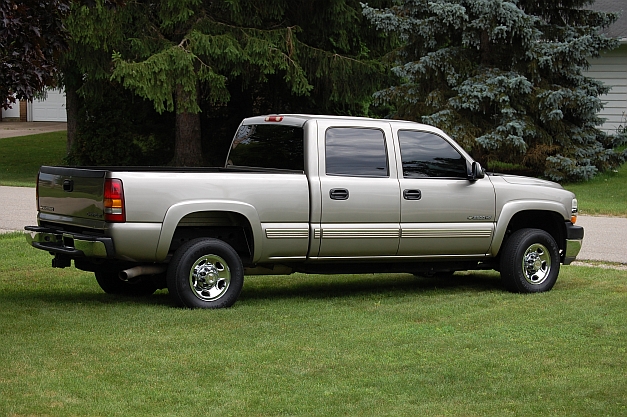 Just like researching and choosing the trailer was a puzzle, the truck was as well. We had a set budget for something we could buy outright - not wanting to take out another loan.  We knew we needed a crew cab to seat us all comfortably while on this adventure.

We initially sat in crew cabs from the big three and could immediately rule out Dodges as their rear seat just wasn’t big enough.

We liked the styling of the Ford but found that Ford seats just weren’t comfortable.  I didn’t immediately rule out Fords based on the seats knowing if we found a great deal on a truck I could purchase an aftermarket seat - but that looked to add $1K - $1500 to the deal.

We settled on the Chevy/GMC as our ideal target. We wanted a crew cab version with a short bed and 4WD. It would be a great puller, keep the overall length down, be more maneuverable in city environments, and allow for some mild off-roading.

From there the question of drivetrain comes up.  I think the longest running and hardest-argued debate among truck guys (once you get past Ford vs. Chevy) is one of fuel type - “gas or diesel”?

Diesels are great pullers, have lots of torque, and get better fuel mileage.  But diesel trucks fetch a higher sale price, diesel fuel costs more, and the trucks are more expensive to maintain and repair.

Personally I have little experience with diesels - having only owned one for a short while years ago.

The truck market is proved tough, especially in used GMs.  We heard the same story from multiple salespeople - the diesel Chevys are harder to find and when you do they are fetching prices above NADA.

I looked on eBay, Craigslist, and Autotrader.com considering buying a truck from out of state.  I’ve done that with past cars - but with trucks felt less comfortable with this approach especially when looking at diesels.  There’s more to look at with trucks and considering we’d be practically living out of this vehicle for a year I really wanted to see the truck in person and be able to test drive it.

As it turned out this was a good choice.  We visited a few trucks within driving distance that looked great in their online ads but in person were disappointments with smoking engines, rust showing, broken mirrors and door pulls, unmentioned modifications (like lift kits), and just feeling like they had been driven hard.

eBook: Homeschool Legally While You Travel the USA

Worried about homeschooling legally while you travel?

The HSLDA says to "follow the laws of any state you are in for more than 30 days". But what do the states say?

We contacted all 50 states, asked them how to homeschool legally while traveling there, and compiled their responses into this 45 page eBook.


$2.99 • PDF
After a few disappointments I started to question what we needed vs. what we wanted.

What we needed was a truck that we could afford, that would seat us comfortably and that would pull the trailer down the road.  Every thing else was a want.

Ultimately what it came down to was that we simply didn’t have the budget for what we wanted. We re-factored our search criteria for trucks that fit what we needed.

We Find A Match

The truck was at a dealership just over an hour away - but based on our previous failures I called first. I wanted to know if there was anything about the truck that wasn’t showing in the photos - broken mirrors, interior rattles, body or frame rust, etc.

The salesman assured me that this one wouldn’t be a disappointment - it was a Florida truck so it didn’t have the undercarriage rust an 8 year old Michigan truck would have, and the rest of the truck was clean and well-kept as well.

So we made the drive, took a test drive, and just had that immediate sense of “rightness”.  The truck felt tight, drives well, and didn’t appear to have been used for heavy towing - at least not with a gooseneck or 5th Wheel type trailer.

We Sealed the Deal

We then made an appointment at a local trusted mechanic and had the it inspected.  It turned out to need a couple of repairs typical to this platform but estimated out to roughly $750 worth of work.  The seller agreed to make the repairs for the same selling price, so we made the purchase and picked up the truck the following week.

The truck wasn’t our ideal.  Our fuel mileage will be roughly the same as a motorhome.  Being 2WD we worried about getting stuck in the right conditions (wet grassy campsites etc).  The truck would also depreciate faster than a diesel version.

But I felt good that we stayed in budget and decided to be smarter about where parked the trailer.  I figured the vast majority of RV’s are 2WD so we won’t be any kind of special case.

We have owned this truck for around 5 years. It has been the most reliable vehicle I have ever owned. It’s been knocked off the road by a texting college student. It’s been dropped off a hoist at a service garage. We’ve put around 70K miles on it, the majority of that towing a fifth wheel trailer.

It’s always had enough power - I have only had one hill I couldn’t accelerate up. I have only had the accelerator on the floor a few times to do so. The Alison transmission has so much holdback power while going down mountain grades that there are times I have to be on the gas to maintain speed.

There have only been a couple of times I would have liked 4WD.

The only real drawback is the small (26 gallon) gas tank. We have learned to look for gas when we reach a 1/2 tank, and between keeping our drive days short and needing bathroom breaks anyway it hasn’t proven to be an issue.

The truck we didn’t want has become one of the family. We need it.

Here’s a quick video of where in the USA this truck has taken us:

The photos below show the truck on the day we took it home. 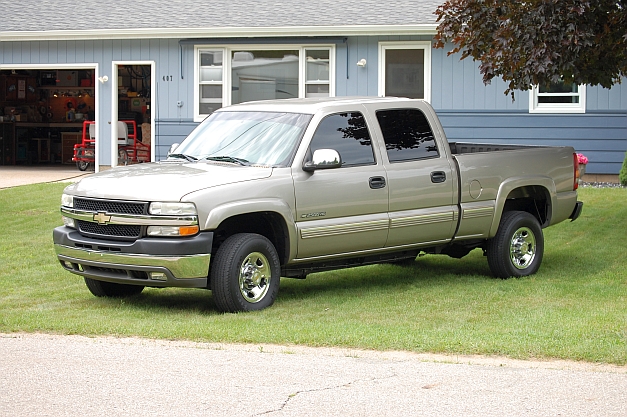 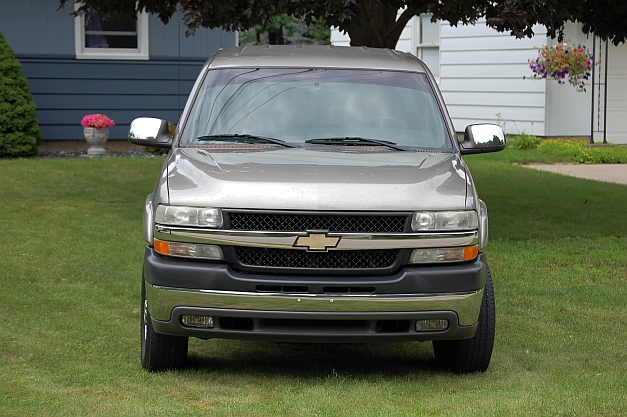 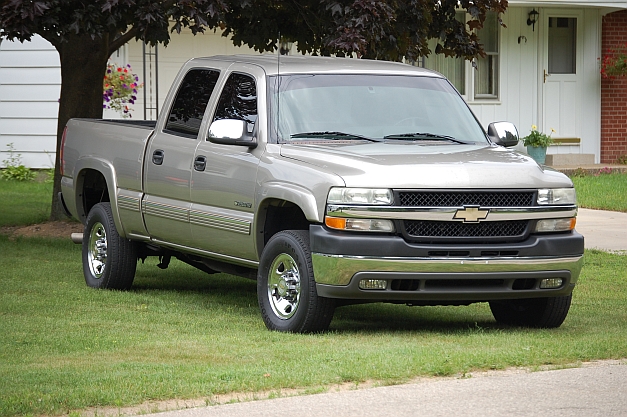 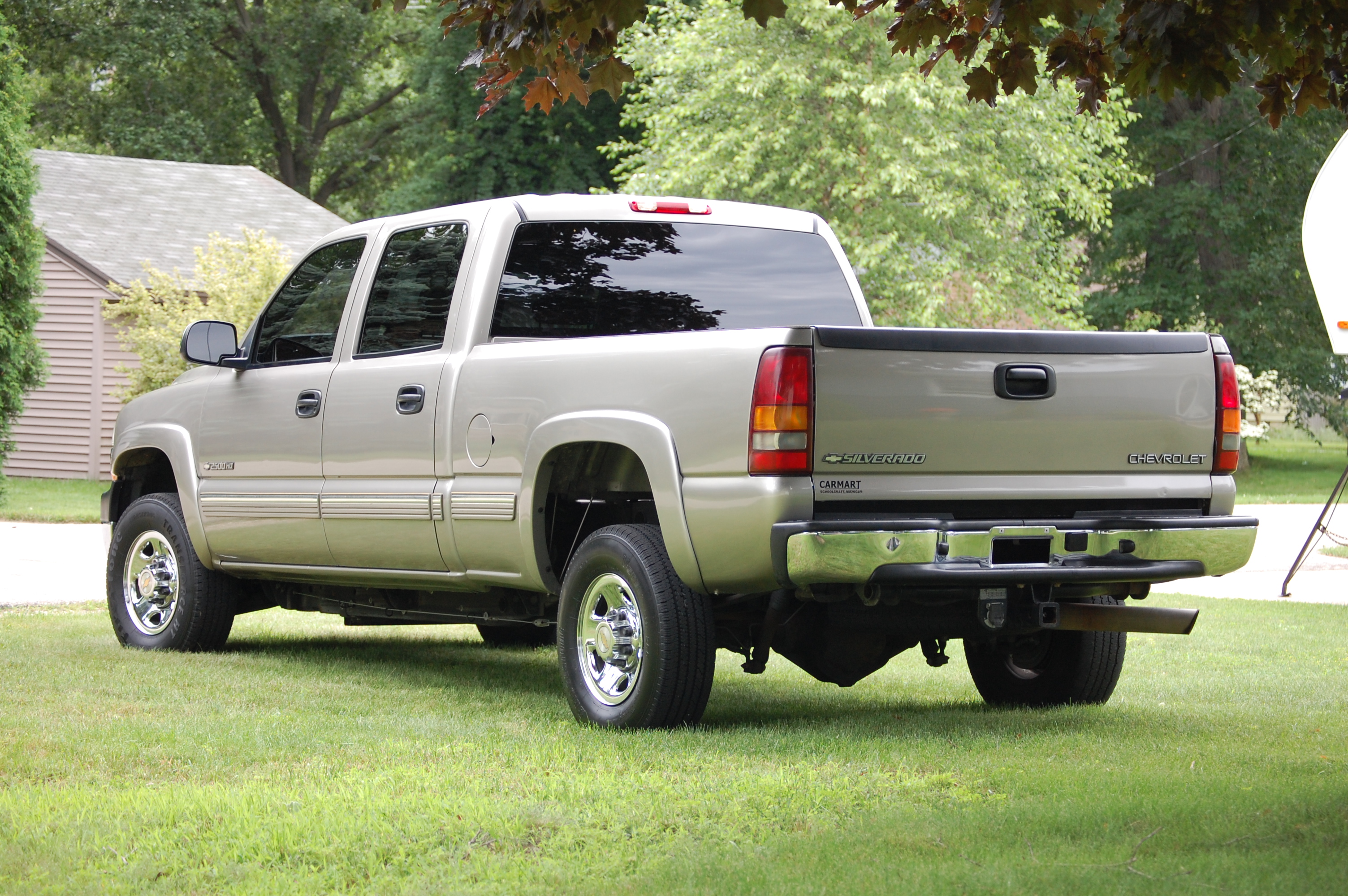